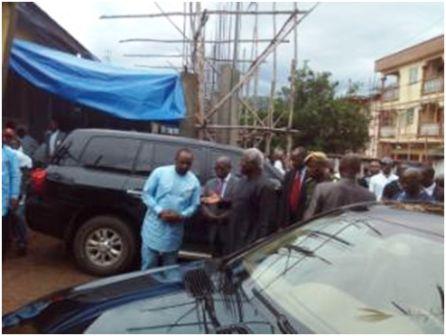 The late Mrs. Sisay is the mother of John Bonoh Sisay, Chief Executive Officer of Sierra Rutile Limited. Her remains were buried after a short service at the Virtue’s Funeral Palour in Freetown. She died in London on Thursday 3rd September, 2015 aged 67 years.

Addressing mourners at the Virtue’s Funeral Palour, Reverend Mary S. Kamara of the National Pentecostal Church described the late woman as a caring mother that helped her family, community, the country and other countries she lived in. she pointed out that people should learn to esteem others in order to save their own lives, and added that the late Mrs. Sisay fought a good fight that will win her a crown of life in the Kingdom of God. “You shall surely reap eternal life when you live a holy life,” she said, and added that the children should follow the footsteps of their late mother.

At the National Pentecostal Church, Fort Street the First Lady Mrs. Sia Nyama Koroma informed the congregation that she met the late women and her husband in the late 70’s. The First Lady in her tribute also recalled in the 80’s when she was received by the late Mrs. Sisay in the United Kingdom. “I was received and treated like her sister,” she said, and further notes that she was a devoted wife who does not only love her family but those around her.

A tribute by John Bonoh Sisay reads: “Mum, your work is done. God has decided to call you back to himself at this hour to rest as a good and faithful servant. Knowing all that I know now God could not have chosen a better vessel for me to have entered this world. It has been my life’s pleasure and privilege to call you mother. You taught me the heart of God through your unconditional love and support. All that is good in me and all that I have done that is commendable has been because of your blessing and prayers. Your legacy will be the life that your children live henceforth. May we not bring any shame to your blessed memory. I hope that when the Lord eventually calls me on high and we meet again I can say that I had lived a life worthy of the sacrifices you made. I love you mum. Rest well.

The sermon was given by Reverend Benjamin Bangura who called for continuous unity in the Sisay family.

The floods and Ebola: a call for r...

Europeans are living longer, but c...