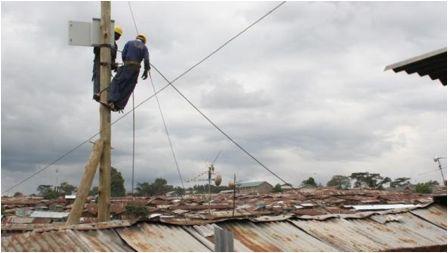 “It’s like when you light a fire: it starts small and then suddenly it gets big. We would get 20 people to sign up, then it went to 40, and so on. And that’s how we started.”

Mary Njiraini, Kenya Power Marketing Officer for Nairobi North, is describing the new approach that the national utility took to one of its toughest challenges: electrifying the country’s slums.

Kenya has some of the largest urban poor areas on earth. In Nairobi alone, a city of 3.4 million, an estimated two million people live in informal settlements. One area, Kibera, is routinely referred to as Africa’s most populous slum.

Until recently, many areas of these settlements had to rely on poor-quality and unsafe electricity. People had to buy illegal connections from local cartels. Services and business activity were highly constrained, insecurity was rife, and electric fires and electrocutions were common.

This picture is now changing – rapidly.

Kenya Power and Lighting Corporation, the national utility, with support coming from a multi-faceted partnership with the World Bank, is now overseeing a major scale up of electricity connections in urban poor settlements – a 30-fold increase in just one year. This success, however, has only come after long struggles, the eventual adoption of a community-centric approach that targeted specific settlements, and a firm commitment by the top management of the national utility.

“Our program started in Kibera, but for a long time we were stuck,” said Dr. Ben Chumo, Managing Director and CEO of Kenya Power. “We would go into Kibera, and we would sense resistance. Eventually we established the reason for this resistance: lack of involvement by the community there.”

From 2011 through 2013, Kenya Power focused on taking down the illegal power connections, only to find them up again just a few days later. Many of their ‘legal’ customers were in fact selling the power to others.

“For two years, we struggled,” said Harun Mwangi, a former senior Kenya Power official and the leader of the program at the time. “We realized we needed to find another way.”

” People now come to us, asking us to light their communities. This is no longer a Kenya Power project. It’s their project. ”