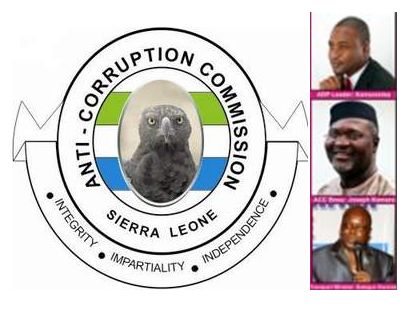 The National Chairman and Leader of the Alliance Democratic Party (ADP), Mohamed Kamarainba Mansaray, has deemed it necessary for the Anti-Corruption Commission (ACC) to probe into the procurement process of Sierra Leone’s new 100 buses recently commissioned by His Excellency the President, Ernest Bai Koroma. (Photo: ACC Boss, Logus Koroma and Kamarainba)

Kamarainba was talking over the weekend on the popular Monologue Good Governance Program presented over the Citizen Radio, 91.3FM in Freetown.

He said he had authentic documents to prove that, through the purchasing of the buses, the Ministry of Transport and Aviation defrauded the people of Sierra Leone the soaring sum of $6.5million by unreasonably inflating the prices of the buses purchased via loan from a company in China called, Polytechnic, known for manufacturing arms, not buses.

In an earlier interview over the same Monologue Program, the General Manager of the Sierra Leone Road Transport Corporation (SLRTC), Bockarie Lewis, refused to state the exact cost of the 100 new buses, noting that the cost does not matter but the maintenance package with which they came. He stressed that this is the first time in the history of Sierra Leone that government has imported buses with full maintenance package which, he said, the SLRTC will effectively use to ensure that the buses live long to continue serving the people of Sierra Leone.

The SLRTC boss rained praise on the Ernest Bai Koroma-led APC government for being the first in the country to purchase 100 new buses “bespoke”, that is, buses manufactured according to the design presented to the manufacturer. This, he went on, coupled with the fact that the buses are made of very strong engines, might have made their cost appear expensive.

In a recent press release, the Ministry of Transport and Aviation maintained that the 100 new buses were procured through the right procedure.

Meanwhile, the ACC, in a recent press release, has stated that it is investigating the procurement of the 100 new buses.