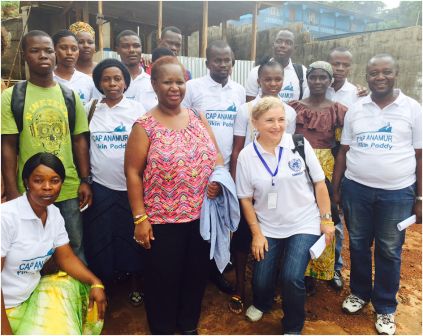 Present at the ceremony were a representative of the Minister of Social Welfare, Gender and Children’s Affairs, Mr. Bashiru Rogers and the Country Director for Cap Anamur, Mr. Dennis Wellmann. Cap Anamur, a German Non-Government Organization responsible for managing the Kontolor OICC, had requested UNMEER’s assistance.

The borehole addresses the immediate requirement of uninterrupted water supply to the Kontorlor OICC during the 21-day quarantine period, as well as provides a sustainable solution to the Kontorlor OICC, a centre for health workers, caregivers, and a home to children whose parents are being treated for Ebola.

After inspecting the borehole project and other facilities at the Centre, Ms. Keita commended the 23 caregivers, who are also Ebola survivors, and Cap Anamur. She thanked them “for showing love and affection to the children while their parents are elsewhere”, and expressed her admiration for their “courage and solidarity to change the lives of those who are suffering.”

The ECM lamented over the loss of Sierra Leonean medical personnel in the course of the Ebola fight, noting that “Sierra Leone will need more doctors and nurses. But it will be difficult to replace those that have been lost within a few months.”

Ms. Keita also lauded the efforts of Dr. David Nabarrao, the UN Secretary-General’s Special Envoy on Ebola, for mobilizing international support to defeat the virus and fund projects like this, which are critical to bringing an end to the outbreak.

Since its establishment in December 2014, 62 children have been cared for at the OICC, of which seven have developed Ebola symptoms. Unfortunately, four of those seven have died, according to Mr. Alhaji Kolleh Yillah, the Cap Anamur OICC Coordinator.

Currently, three children are staying in the Centre, which reflects an overall downward trend in Ebola transmission.

Mr. Yillar said that the water borehole has boosted their efforts to care for the children, and disclosed plans to also supply water to a nearby school.

The water borehole is one of UNMEER’s Quick Impact Projects (QIPs), a series of small, UN-backed projects that can have immediate strategic impact in ending the Ebola epidemic and helping affected countries recover. QIPs funds are provided by the UN Multi Partner Trust Fund, which facilitates a UN system-wide approach to addressing multifaceted issues, including humanitarian crises.

Solving the energy crisis in West... 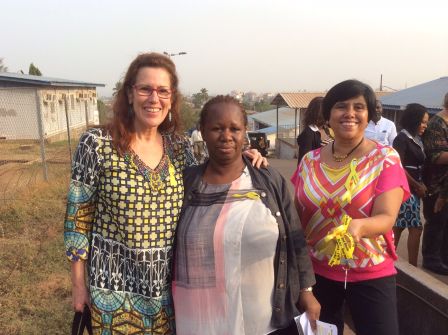