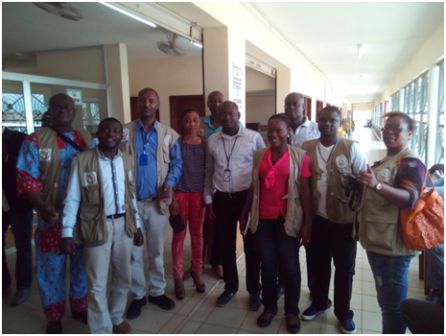 A Media Team from the AU Commission led by Mrs. Wynne Musabayana arrived in Sierra Leone on Wednesday 20th May 2015 after visiting Liberia and Guinea to assess the current situation and also get facts on the current challenges and successes scored so far. The team visited the Nigerian Mobile Laboratory in Kambia, the District Ebola Response Center Office in Kambia, Gbendembu Ngowahun Chiefdom in the Bombali District and other areas in Freetown and Port Loko.

The African Union Support to Ebola Outbreak in West Africa (AU-ASEOWA) is said to have scored successes in helping Sierra Leone’s Ebola response become a success. Since their arrival last year the AU volunteers were sent in various Ebola response medical sectors across the country.

The leader of delegation, Mrs. Wynne Musabayana said the team of AU Volunteers in the three countries comprise of medical doctors, lab operators and other technical staffs. “We want Africans to know what their Union is doing for them in the Ebola response,” she said, and added that their key messages centre on stopping complacency and stigmatization. “Ebola is still around and we want the lives of our people protected,” says Mrs. Musabayana.

The AU, she said is having the Africa Centre for Disease Control to do a research on various diseases and find the necessary cure.

Dr. Elizabeth Mgamb is the Head of the AU-ASEOWA Team in Sierra Leone. During a debriefing with the visiting team said there are 306 volunteers in Sierra Leone that are working hard to ensure that Ebola becomes a thing of the past in the country. She revealed that the Nigerians and Ethiopians have completed their six months mission in the country and will be leaving by the end of the week. She pointed out that they have been supporting in various areas like hospitals, treatment centres, peripheral health units, community care centers and overall they have presence in all 37 Centres across the country.

Some of their activities she made mention of include: case investigation, contact tracing, monitoring quarantine homes, psychosocial support to suspected and confirm cases, and also embark on community engagement programs like training of locals and sensitization on Ebola prevention.

Head of the District Ebola Response in Kambia, Dr. Alfred Kamara says Magbema Chiefdom is the only threat for now in the district response where there are 14 quarantine homes and three positive cases currently admitted in the district. He pointed out that they are currently facing great risk because the district is sharing borders with Forekaria Village in Guinea where there are 686 cases recorded and they don’t practice the quarantine system. “We have put in place the Kambia Community Action Plan, which involves all relevant stakeholders like Members of Parliament, Traditional Leaders and others that are helping in community mobilization and sensitization,” he said, and further states that in the future they are hoping to have a health system that is competent enough to handle and unforeseen Ebola case.