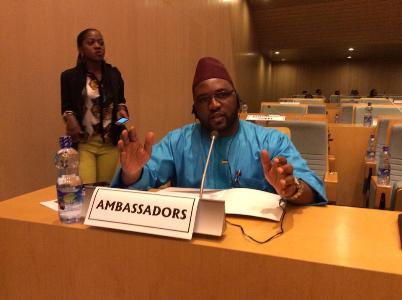 Sierra Leone’s Deputy Permanent Representative to the African Union and the United Nations Economic Commission for Africa, Ambassador Ismael Koroma has called on the AU and other partners to redouble their support to end malaria in Sierra Leone.  (Photo: Ambassador Koroma making a point)

In his statement to the African Union and the African Leaders Malaria Alliance (ALMA) High Level Dialogue on ending malaria by 2030, organized on Saturday 25th April, 2015 at the African Union Headquarters in Addis Ababa; Ambassador Koroma said that the significance of this year’s theme to invest in the fight against malaria cannot be over emphasized; stating that it was very critical and extremely key to the survival of the future generation of the continent as most of the victims of the malaria epidemic are children.

He stated that Sierra Leone has made tremendous strides in the fight to eradicate malaria. He expressed serious concern about the negative impacts of the Ebola outbreak on the country’s successes and achievements in the malaria fight; thus, calling on the AU and other partners to redouble their support to Sierra Leone in order to prevent any reversal of gains made by the West African nation.

It could be recalled that Sierra Leone received the Excellence Award for its fight against malaria from ALMA during the January 2015 AU Heads of State Summit in Addis Ababa.

The African Union Commissioner for Social Affairs, Dr. Mustapha Kaloko and the Zimbabwe Ambassador and Chair of the Permanent Representatives’ Committee, His Excellency Albert Chimbindi also called for sufficient resources to promote and implement the AU’s ‘’Big Push’’ project to eliminate malaria in Africa by 2030.

The Minister of Health of the Federal Democratic Republic of Ethiopia, Dr. Kesete Admassu registered his Prime Minister’s commitment to eradicate malaria on the continent by 2030.

He said as Chair of ALMA, His Excellency Prime Minister Hailemariam Desalegn launched the malaria score card during the January 2015 AU Summit in a bid to track-down progress made in the fight against malaria on the continent. He said according to statistics from the WHO, Africa registered considerable reduction of malaria cases between the period of 2000 to 2013, but warned that more needed to be done.

From Cline Town to Mount Aureol: (...