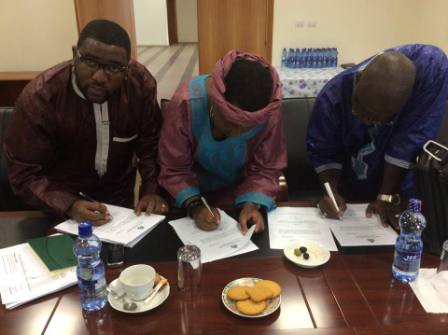 The African Ambassadors’ Spouses Group in the Ethiopian city of Addis Ababa on Friday 20th March, 2015 presented a check of One Hundred Thousand Ethiopian Birr to the ECOWAS Ambassadors and Permanent Representatives to the African Union and the United Nations Economic Commission for Africa; in a bid to accelerate the speedy eradication of the Ebola Virus Disease in the three most affected countries in West Africa.

The wife of the Ambassador of Seychelles and President of the Group, Mrs. Jourdanne Nourrice expressed their sympathy to the governments of Sierra Leone, Liberia and Guinea for the thousands of their citizens who have succumbed to the Ebola Virus Disease. She said, as spouses of the African Ambassadors in Addis Ababa, they were seriously worried about the distressing and devastating impacts of the epidemic on the growth of the continent, especially with regard to the wellbeing of women and children.

In a brief but passionate statement of appreciation on behalf of His Excellency President Ernest Bai Koroma and the people of the Republic of Sierra Leone, the Deputy Permanent Representative of Sierra Leone to the African Union Commission, Ambassador Ismael Koroma praised the Ambassadors’ Spouses for what he referred to ” their great effort and show of women’s commitment and solidarity ” in the fight against the dreadful epidemic on the continent. He said the Government of Sierra Leone was very committed in the fight against the Ebola virus, and has put in place robust mechanisms in order to ensure that the Ebola Virus Disease becomes an epidemic of the past within the shortest possible time. He also assured the Ambassadors’ Spouses that the money will be utilized for the intended purposes.

The Regional Dean of the ECOWAS Ambassadors Group in Ethiopia and Permanent Representative of the Republic of the Gambia to the AU, Ambassador Sajo Jallow congratulated the Ambassadors Spouses for their initiative and continued commitments in ending the Ebola scourge on the continent. He said the Group has been very vital in providing humanitarian assistance to the less-privileged children on the continent, as well as resiliently working alongside their husbands in promoting African solidarity.