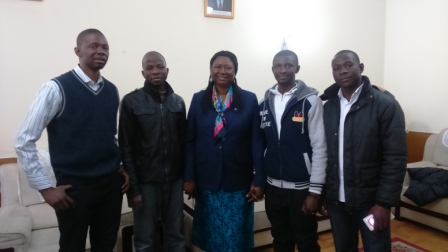 The Sierra Leone Students’ Union in the People’s Republic of China on Sunday 22nd February brought the curtains of its annual convention down, marking an end to some somber moments shared by students, some only meeting for the first time since coming to China for studies.  (Photo: Deputy Envoy with new Executive)

Climaxing the four day long annual meeting was the election into office and subsequent presentation of the New Executive to the Sierra Leone Embassy, on Monday 23rd February, 2015. This came, following the departure of the general student body, amidst tears of joy and in one peculiar case, tears of sorry of parting running down the eyes of a student who left for a city where he is the only Sierra Leonean student.

In the words of a student, “going back to another province or university where you stay alone as a Sierra Leonean is as challenging as leaving colleague students with whom you have stayed for four days through an annual event.” Suggestions there are, now, amongst students for their leadership to consider extending the days of their convention beyond the traditional four days.

Officially receiving the New Executive, Deputy Chief of Mission, Madam Alice Kumba Momoh commended them for a peaceful annual convention, thus culminating to their election. She admonished them to “remain united as a body not forgetting why colleagues have elected you into office. When you work collectively, you will achieve a lot and again, trust is very vital in your success as an Executive.”

Madam Momoh called on the general student body, through the New Executive to take into cognizance the pivotal role education plays in national growth, stressing that their being in the People’s Republic of China “has to do with education which is paramount.”

Speaking, Head of Chancery at the Embassy, Unisa Sahid Kamara congratulated the New Executive whilst assuring them of the Embassy’s fullest support to the welfare of Sierra Leoneans in China, and particularly students, who form bulk of the Sierra Leonean population in the PR China.

“With this Executive, the Embassy’s working relation with students has been made easier”, since in his words, “the new President is someone that has students’ matters at heart and we are hopeful, he will continue working in that direction”

Presenting the Executive earlier, President Adikali Kabba Sesay (PhD Candidate) thanked the Embassy for the support it keeps giving to students not just in advocating on their behalf to Government, but by allowing students to host their annual convention in the premises of the Embassy.

President Sesay conveyed, on behalf of the general student body, profound thanks and appreciation to especially Ambassador Victor Bockarie Foh and assured of their commitment to always work with the Embassy on matters dealing with students.

“As students we are here as your kids, irrespective of age. We therefore look up to the Embassy for guidance and direction,” President Sesay said.

The Vice President, Chernor M. Bah in his brief statement, spoke of how Sierra Leonean students are literally the envy of students from other countries given their relationship with the Embassy. “Sierra Leone Embassy is the only Embassy that allows students to be hosting such an annual event for which our colleagues continue to admire at us. For that we are ever grateful”.

This year’s student meeting was held on the theme “Effect of Ebola Virus Disease (EVD) in the Three Mano River Union Countries with Particular Focus on Sierra Leone”. It brought over 100 students together from different cities in the People’s Republic of China, with the Embassy playing a lead supportive role.