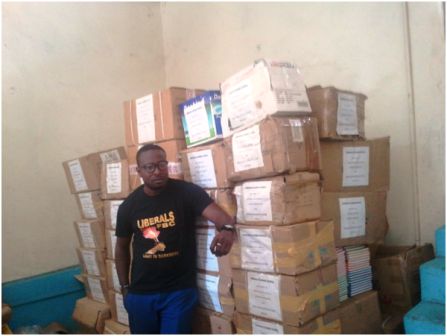 The Liberals Brotherhood Sierra Leone has donated learning materials to the Makeni, Bo, Kenema and Freetown city councils respectively. The donations were part of the organisation’s post-Ebola project to complement the efforts of the government and partners.   (Photo: Consignment of learning materials ready for distribution)

The learning materials which included exercise books, pens, pencils and rulers, were donated to the four councils for onward distribution to school children who survived and lost parents to Ebola.

Speaking at the donation ceremony at the Makeni City Council on Friday, Orator of the organisation, Alfred Minkailu Koroma described the Liberals Brotherhood as an organisation that was formed by past members of the famous Liberals Club at Fourah Bay College. He said the Club was formed in the 1990s to provide a sound political ideology in students’ union politics. Mr. Koroma said the Club now has several hundreds of its members in all spheres of life across the world. The Orator said Liberals Brotherhood Sierra Leone was cognisant of the devastating effects of the Ebola disease in the country and the interventions required when the disease shall have been wiped out. “This is why we thought it fit as an organisation to contribute in the area of education to assist the government-through the local councils- to enable children go back to school”, he stated.

Receiving the materials on behalf of the council, the Chief Administrator of the Makeni City Council William Alpha, expressed   gratitude to the Liberals Brotherhood Sierra Leone especially at this time when the government was working to reopen schools. He spoke of his admiration for the Liberals Club, whose formation, he said, was conceived during his university days. He said he would collaborate with the ministries of education and social welfare to target the intended beneficiaries.

The handing over of learning materials for the Bo and Kenema city councils was done on Saturday. The materials for the Bo City Council were received by Councillor Osu Kebbay who thanked Liberals Brotherhood Sierra Leone for the donation, which he described as pertinent to their preparation for the reopening of schools. The storekeeper of the council Edward Dakowa signed the delivery note and promised to utilise the materials for their intended purpose.

The materials for the Kenema City Council were received by the Chief Administrator of the council, Daniel Sahr Momoh who stated that he was never surprised about the developmental projects now being implemented by Liberals, as during his days at FBC, members of the brotherhood were known to be developmental and for providing astute leadership on and off campus.

At the Freetown City Council, members of the Liberals Brotherhood were warmly welcomed by the Chief Administrator of the council, Abu Bakarr Daramy.

The Deputy Mayor of Freetown, Chief Administrator, Councillors and members of the Liberals Brotherhood Sierra Leone posed for the camera after the presentation of learning materials

The Deputy Mayor of Freetown Hannah Mary Jayah, described the donation as a “best practice” which other Sierra Leoneans should emulate, especially when the funds for the materials are from membership subscriptions.

The Liberals Brotherhood Sierra Leone’s post-Ebola project will also provide scholarship to pupils of various primary and secondary schools in the country.