UN stresses the need for Ebola surveillance in border towns 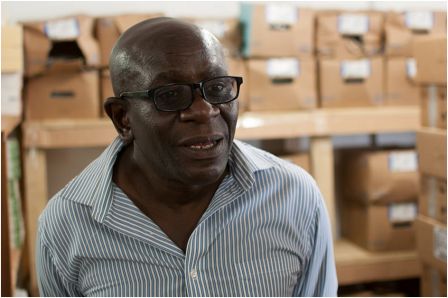 UN stresses the need for Ebola surveillance in border towns

Jan 26, 2014 – Representatives of the governments of Liberia, Sierra Leone, Guinea, and Côte d’Ivoire today began meeting in Freetown, Sierra Leone, under the umbrella of the Mano River Union, a sub-regional political grouping comprising the four countries, to agree on methods to control and prevent disease outbreaks in the border areas.  (Photo: Amadu Kamara, UNMEER Crisis manager for Sierra Leone)

The United Nations supports the initiative, according to Amadu Kamara, Crisis Manager for the UN Ebola Mission in Sierra Leone. Mr. Kamara who was speaking on behalf of UNMEER Special Representative of the Secretary General Sismail Ould Cheikh Ahmed, told the gathering that included Ebola response administrators, medical officers, technical and operational planning experts from all four countries that Ebola could not be defeated without “addressing its regional dimensions.” The virus should be seen as “one epidemic with many fronts,” he beseeched.

Dubbed the “Sub-regional Ebola technical meeting on border surveillance and disease control,” participants hope to formulate guidelines that will regulate how patients, corpses and laboratory samples are transferred across borders.  Such guidelines will also focus on cross-border surveillance conduct and contact tracing.

There is a UN mandate to support “efforts to rationalize resources, provide the strategic framework for a regional approach, as well as to ensure that our borders do not make it easy for the disease to escape,” stressed Mr. Amadu. Currently, he said: “We have moved from a phase where we were being hounded and hunted to a stage where we are now hunting Ebola.” Recent figures by the World Health Organization show that transmission rates are declining in all three countries.

The high-level meeting is sponsored by the African development Bank (AfDB). The bank’s Country Representative for Sierra Leone, Yero Baldeh, noted that a lack of an effective border surveillance system at the time of the disease outbreak exacerbated its spread.  He also stressed that border populations should be considered as one rather than as different people from different countries.

The MRU had been canvassing support for the socioeconomic development of the border towns. While welcoming delegates to the meeting, Secretary-General Saran Daraba Kaba again underscored that point. The MRU describes border communities as suffering “distance gradient effect,” meaning that they are often isolated and lack basic amenities, particularly in the health sector. MRU governments and their international partners must now refocus attention on those communities, she reiterated.

Sierra Leone’s health minister, Dr. Abubakarr Fofana, acknowledged that prior to the Ebola outbreak, there was an “absence of a strong and resilient health system.”  He added that the unique nature of the disease, including its speed of spread from rural to urban areas, made it initially difficult to control. “We are now suffocating the virus; we are chasing it with ferocity,” he said.

The recurring theme at the opening ceremony was the need to get to zero case. Monty Jones, an adviser to Sierra Leone’s President Ernest Koroma, emphasized that Ebola will be defeated when all the affected countries register zero cases and there is no transmission after 42 days. “If Liberia completes 42 days and Sierra Leone still has Ebola, Liberia is not considered safe,” corroborated Paolo Conteh, the Chief Executive Officer of Sierra Leone’s National Ebola Response Centre.

All four countries have a combined population of 45 million of which 2.2 million are said to be constantly moving across the borders. Border community inhabitants often have socioeconomic and cultural relationships. “This has led to a situation where suspected border cases and confirmed cases have moved across borders in public road transport or even on foot,” according to an MRU report.