DWHH launches operation ‘weed out the sick’ at Tombo 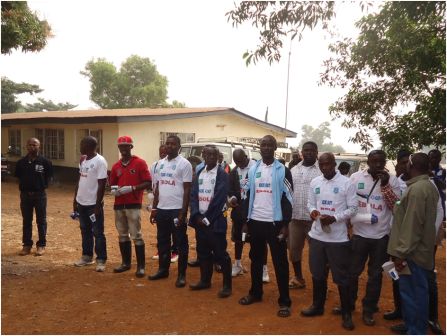 DWHH launches operation ‘weed out the sick’ at Tombo

In a bid to complement Government efforts to fight against the Ebola virus a German nongovernmental organisation Deutsche Welthungerhilfe (DWHH) in partnership with Rectour Volunteers and Ebola Task Force members and the National Ebola Response Center has officially launched an operation to weed out the sick in Tombo.  (Photo: Welthungerhilfe Ebola response volunteers with their thermometers for the operation to weed out the sick from the Tombo community)

The operation is to complement the Western Area Surge (WAS) which starts on the June 19, 2015 so as to bring out sick people from the homes.

Volunteers has already started visiting houses within Tombo and neighbouring communities with thermometers for temperature checks and distributing of Ebola information leaflets while others use megaphone to explain in local languages about the dangers of Ebola.

He said the operation is intended to identify sick people with Ebola symptoms within the Tombo community and other ailments where many people cluster while doing a popular fishing business in the area.

He said the operation to weed out the sick is to complement Government efforts in the fight against Ebola during the phase 2 of the Western Area Surge, which will commence on Monday January 19, 2015.

He said Welthungerhilfe has trained and supported several partners within the Tombo community to participate in the operation with 170 volunteers.

He said the groups were carefully selected  from the Ebola Task Volunteers in the area, Rectour Volunteers inlcuding the Police and the Military.

17 groups have been created for the operation with each comprising of ten members to undertake house to house check for the sick in homes, they will also be mounting Ebola check points with increased hand washing faculties.

The National Project Coordinator for welthungerhilfe Mafilah Kellie Marrah said they have provided 44 coastal communities with logistics for the groups which include soap, rain boots, touch light, lamp, batteries, thermometer, and buckets for effective work.

A Nutritionist from the Ebola Command Center Madam Owizz Koroma spoke about their activities in ensuring that the food provided by welthungerhilfe for quarantined homes should be used judiciously so that they cannot escape for food.

Major Cogra head of the Burial Team at the National Command Center in the Western Area assured that both the Military and the Police will enforce the operation weed out the sick effectively.

He encouraged people within the Tombo community to stay home for the house to house check so that they can enforce the law and wed out the sick.

Funds for the implementation of the Western Area Ebola Response byWelthungerhilfe was provide by UK Aid-DFID Ebola Emergency Response Fund (DEERF) in partnership with Goal-NGO and the German Foreign Ministry and the German International Cooperation (GIZ).

In line with Welthungerhilfe activity plans for Ebola Response they are working with the Ministry of Health and Sanitation and the District Health Medical Team (DHMT) in collaboration with National Ebola Response Center.

An inter-agency mission kicks off... 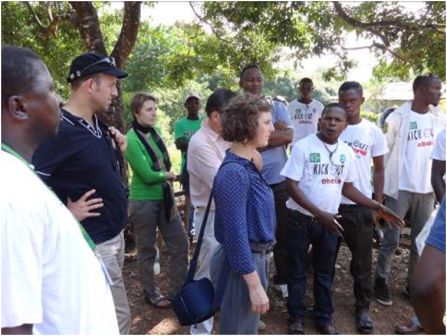