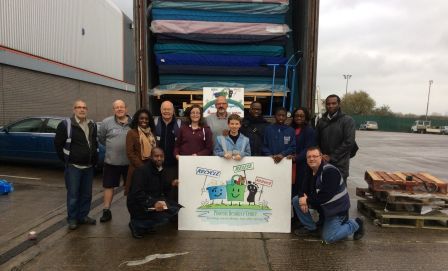 Members of the Sierra Leone UK Diaspora Ebola Response Taskforce and the National Organization of Sierra Leoneans in North America (NOSLINA) are pleased to today announce their cooperation to airlift 26 pallets of urgently needed medical supplies and equipment worth $85,000 to Sierra Leone on January 3, 2015. On November 24 2014, the chair of the Taskforce, Ade Daramy, and the Executive Director of NOSLINA, Suna Nallo, signed a memorandum of understanding committing their two organizations to collaborate. The agreement enabled the Taskforce to take advantage of NOSLINA’s relationship with Airlink through which humanitarian aid is airlifted to hotspots on favourable terms; its relationship with Medshare that makes available high quality surplus medical supplies and equipment at heavily discounted rates; and NOSLINA’s well-established procedures for securing expedited clearing of medical aid with authorities in Sierra Leone.  (Photo: Sierra Leone UK Diaspora Ebola Response Taskforce)

Through its UK fundraising efforts, the Taskforce wired just over $20,000 to NOSLINA enabling the purchase of over $85,000 worth of urgently needed medical supplies to aid the Ebola response in Sierra Leone. According to the World Health Organization’s (WHO) 31 December 2014 Situation Report, there have been 20,206 reported cases of Ebola virus disease and 7,905 reported deaths across all the three worst-affected outbreak countries, Guinea, Liberia, and Sierra Leone. Sierra Leone accounts for 9,446 reported cases (47% of the three countries’ total). WHO notes that Ebola Virus Disease “transmission remains intense in Sierra Leone, with 337 confirmed cases reported in the week to 28 December, 2014 – more than double the number of cases in Guinea and Liberia combined” and is at its most intense in Sierra Leone’s western and northern districts.

The recently launched “Operation Western Area Surge” aims to break the cycle of transmission of the Ebola virus, increase treatment and isolation bed capacity, and isolate confirmed and suspect cases. This will likely spike demand for medical supplies and equipment and make the timing of this Taskforce-NOSLINA joint initiative fortuitous.

UK-based Sierra Leonean medical practitioner and Taskforce member, Dr Achmed Kamara said “As a doctor myself, I understand the importance of having the right tools to tackle the urgent job at hand of providing essential healthcare, that is why as a Taskforce, we place emphasis on working with the authorities in Sierra Leone to get urgently needed medical supplies and equipment to our heroic healthcare workers risking all on the Ebola frontline.”

“We are delighted to be partnering with our UK compatriots at this time of our nation’s most urgent need,” observed NOSLINA’s Executive Director, Suna Nallo. “We have established a number of important relationships here in North America with organizations and individuals to whom we are immensely grateful, it was logical to extend these networks to other Sierra Leoneans around the world for the benefit of our beloved Sierra Leone,” Ms Nallo concluded.

The airlifted supplies will arrive in the same week as a 40-foot container of over $115,000 worth of medical supplies that the Taskforce, in partnership with Phoenix Resource Centre, an environmental Charity that distributes surplus stock from corporations to nonprofit causes, dispatched from the UK in November 2014. For the taskforce this brings the total worth to $200,000 of urgent medical supplies airlifted from the US and shipped from the UK expected to arrive in Freetown this week.

Recognizing the urgency of the situation, members of the Equipment and Supplies Pillar of the Taskforce set themselves target to raise £45,000 to cover shipping, distribution, coordination, and contingency costs for the project.

The Taskforce gratefully acknowledges donations and pledges from the Association of Independent Tour Operators (AITO); AITO members who have started an ‘Extra Ebola AITO Fund’; SLWT, a Sierra Leone diaspora-led UK-based charity; Carew Pole of Antony; the Sierra Leonean-run UK Rockel Shipping Company Ltd; members of the public; and donors who prefer to remain anonymous, Taskforce members have received donations and pledges of nearly £30,000 so far.

The Taskforce has set up a fundraising page.

Taskforce members are working with Sierra Leone government authorities in Freetown through the Chief Medical Officer, of the Ministry of Health and Sanitation, Dr Brima Kargbo, and the CEO of the National Ebola Response Centre (NERC), Major (rtd) Palo Conteh. Specifically, the Taskforce has also extended a hand of partnership to authorities in Sierra Leone to strengthen systems to ensure supplies get to where and when they are needed most and that such systems become a long-term characteristic of healthcare delivery in Sierra Leone after the outbreak.

Rattled but we shall not fall