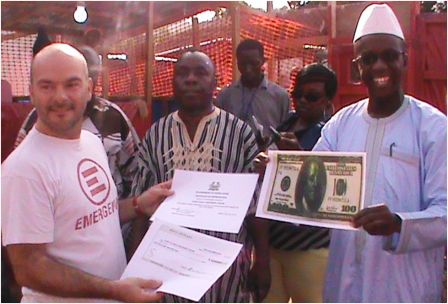 Freetown, Dec. 29, 014 (MOHS) – In appreciation of the hard work, commitment and dedication to service in the fight against the Ebola virus disease, the President, Dr. Ernest Bai Koroma has through the assistance of the World Bank presented a cheque of $10,000 to Ebola Treatment Centres in the Western Area, Makeni, Kenema and Kailahun.  (Photo: Dr. Abu Bakarr Fofanah making the symbolic presentation)

Making the symbolic presentation on behalf of the President, the Minister of Health and Sanitation, Dr. Abu Bakarr Fofanah at the Lakka Treatment Centre noted the sacrifices made by the staff at the Centre since its inception, and in recognition of their good work presented a Certificate of Appreciation and the token of $10,000 Cheque.

Dr. Fofanah paid tribute to the staff of the various Centres across the country that lost their lives while trying to save life, and prayed that God grant them perpetual peace and rest.

He said as much as they celebrate the Christmas Festive, the mourning of their lost colleagues is also a moment of reflection, noting the sacrifices made and their loyalty to serve humanity.

Dr. Fofanah described the Ebola as vicious and destructive, and enemy of tears and sorrow in our doorsteps.

He commended staff of the Centre for their gallantry, courage, and esteemed and laudable service to the nation, and prayed for the speedy end of the pandemic.

Dr. Fofanah reiterated government’s commitment to ensure their safety and well-being, hoping that the Certificate of Appreciation and token would go a long way in recognition of their remarkable contributions in the fight against Ebola.

The Centre Coordinator, Dr. Rolla Lucal, expressed gratitude and appreciation to the President, the Minister and Government for the gesture, describing it as an invaluable motivation.

He said both the local and international staff have been working assiduously, and are poised to continue the good work.

The Minister in a similar vein addressed staff of the Hastings Treatment Centre, and presented their token and Certificate of Appreciation for their esteemed and laudable service in the Ebola fight.

Dr. Sekou Kanneh on behalf of the Centre Coordinator, expressed gratitude to the President, the Health Minister, the World Bank and the government for the gifts.

“We are front line soldiers, the Ebola is our war, and as an army we would defeat the virus”, Dr. Kanneh said with optimism.

At the Connaught Hospital, the Matron, Isatu Kamara described the gesture as an incentive and motivation, though it came in a period of mourning, and thanked the President, the Minister and government for recognizing their efforts.

Matron Isatu Kamara of Connaught Hospital proudly receiving the cheque and Certificate of Appreciation from Health Minister, Dr. A.B.Fofanah in recognition of their laudable service

Addressing staff of the Western Area Command and Control Centre, and the 117 Call Centre, the Minister similarly acknowledged their good work and on behalf of the President and government presented the token and Certificate of Appreciation.

Representatives of the Command and Control and Call Centre, Madam Zuliatu Cooper and Saffa Andrew Koroma said they were gratified by the honour and recognition and reiterated their commitment to ensure continued dedication to service.

In Makeni at the Magbente Treatment Unit, Dr. Fofanah paid tribute to all front line health workers who died while trying to save lives, and expressed condolences to two of their staff, Senior Nurse, Isaac Sesay, and Midwife, Victoria Lamin who passed away 24 hours to the Minister’s arrival.

Matron Halimatu Shyllon of the Magbente Treatment Unit receiving the cheque and Certificate of Appreciation and recognition from Health Minister, Dr. A.B.Fofanah

Presenting the token of $10,000 and the Certificate of Appreciation in recognition of their laudable service to the nation, Dr. Fofanah encouraged them to continue the good work and assured them of government’s commitment to their welfare and well-being.

The Matron, Halimatu Shyllon described the gesture as an invaluable treasure and a motivation for their continued good work, adding that though there are challenges in the area of risk allowances they are still committed to give their best.

Other beneficiaries include the 34 Military Hospital Ebola Treatment Unit, where Col. Dr. Sahr Foday received on behalf of his staff, and expressed their appreciation to the President, the Health Ministry, and the government for the recognition.

Health Minister, Dr. A.B. Fofanah presenting his Christmas gift to a child at Ola During Children’s Hospital in Freetown

Presentation of Christmas gifts by the Minister to Children of the Ola During Children’s and Makeni Government hospitals climaxed the ceremony.

In another related development, the President also donated 20 Cows, one each, and a token of Le2,000,000 to the various Ebola Treatment Units in the North, East, South and Western Area.

Stay with Sierra Express Media, for your trusted place in news!<hr?

Report of the meeting between Brig...