Texas Chief Heroes of the year 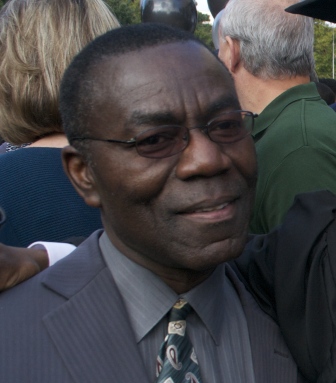 Texas Chief Heroes of the year

The year 2014 has come to an end, but the memories of pain inflicted on Sierra Leoneans and the West African people by the ugly Ebola virus will never be forgotten. Much has been done by Diasporas to combat the deadly Ebola virus, the disease that plagues our country, but the task was too herculeanin nature to allow success.  The news reporting about corruption and mishandling of resources by authority to combat the epidemic was horrifying to most of us abroad. However, many Sierra Leoneans and friends of Sierra Leone abroad continue to put their time and effort to remedy the numerous problems in our country. It is in a general view that the spread of this Ebola virus disease can be contained by human response using different approaches by the government, the people in the country, and us in the diaspora.  (Photo: Mr. Reuben Kinie Ndomahina)

In the Dallas-Fort Worth metropolitan cities of Texas, the Sierra Leone community has made significant contributions to fight against the Ebola virus. Almost all the organizations have responded to the cause of this dreadful epidemic by sending money and medical supplies to Sierra Leone.  Some individuals’ efforts were exceptional, good to be recognized. Hence, the Texas bureau chief is proudly recognizing faces of change, innovators whose efforts have generally advanced the common good.

As the Texas Bureau chief in Dallas, I have found it necessary to recognize and honor two specific individuals who have made differences of particular importance throughout the year 2014 in our community in Texas, and their enormous contributions to the fight against the epidemic back home. These two individuals have shown a passionate devotion to the Ebola crisis by getting involved deeply to participate in activities that vie to respond to the epidemic. They volunteered their time, money and energy to prompt Sierra Leoneans and persuade friends of Sierra Leone to help combat the epidemic.

The first person to be recognized as the Texas bureau hero of the year was Mr. Reuben Kinie Ndomahina. Despite partisans of various organizations in the metropolitan area, Ndomahina, without naming himself an adherent of any of the parties, fought vigorously for the community at large to come together to promote our cultural values in Texas. He galvanized community leaders and established a coordinating committee with a view to build the foundation that will bring all organizations under one umbrella when it comes to a national issue like the current Ebola crisis.

All through the year 2014, Ndomahina initiated telephone conferences on Sundays with the Sierra Leone-DFW coordinating committee to discuss possible ways of helping our people back home. Ndomahina has also volunteered to be a media liaison person who collaborates with the news and current affairs bureau chief to coordinate and and promote all community functions and share important news about our country. Almost everyone having function communicates with Reuben for onward dissemination to the entire community.  He has been particularly fastidious in ensuring that the community be informed of accurate information about our country. Despite his busy work schedule, doctoral studies, and family commitment, Ndomahina is still committed to upholding the values of our country by mobilizing people to “celebrate” together, our country’s Independence anniversary every year.

No one in the community can exceed Ndomahina in the position of integrity and ability.  He is a true selfless citizen of Sierra Leone. He Embraces the principles of togetherness and speaks one voice to promote the image of our country. He must be commended on the nobility of his purpose, to champion a collective body (currently at the formation stage) for all Sierra Leoneans;  ‘Association of Sierra Leonean Organizations in Texas’ (ASLOT). Under his leadership, ASLOT (to-be) has shipped several different consignments including food and medical supplies to Sierra Leone in response to the raging epidemic. Many people I interviewed about who should be the Texas Bureau Chief Hero of the year reflected and commended Ndomahina, while congratulatinghim for his enterprise and altruistic approach to life.

Mr. Ndomahina is currently a third-year doctoral student majoring in Counseling, and a Clinic Assistant Director at Texas A & M University – Commerce, Department of Psychology, Counseling, and Special Education (a CACREP-accredited program). He had successfully served and led Tegloma Federation International Incorporated, Dallas Chapter (a non-profit Sierra Leonean organization), as vice president for two consecutive terms prior to being president for a two-year term as well. Currently, in his church congregation; Our Savior Lutheran Church (OSLC) in Mesquite, Texas, he devotedly serves as church council member. Reuben thankfully professes that the source of his intrinsic and extrinsic motivation, and ultimate satisfaction to “humbly serve” people (a legacy he carries on from his parents), is primarily inspired by the overwhelming perpetual love and support he benefits from his wife, Adama and their three children, friends and colleagues, the SL-DFW coordinating committee, family members, and the collective effort of the community of Sierra Leoneans and non-Sierra Leoneans at large. “My optimal prayer and desire for the year 2015, is to see and celebrate an Ebola-free Sierra Leone, Liberia, and Guinea,” he said.

The second person who won the Texas Bureau Chief Hero of the year is Nadine R. King-Mays. She is an African American woman who came to our midst through Mr. Foday Fofanah,the Chairman of the Board of Directors for the non-profit organization, Sankofa Infrastructural. Mrs. Nadine Mays is the Executive Director of Sankofa Infrastructural, a Sierra Leonean non-profit organization in the United States.  Her eminence in the community bestowed her with a well-deserved recognition and a thank you by this media house.  Mrs. Mays established herself as a family of Sierra Leone, a nation that is going through horrific times of crises. Her humane philosophy, her capacity for understanding what is Africa in general and her tireless effort to attend Ebola conferences all the time are qualities which the Sierra Leone community believe endure her to all. Everyone would like to read Mrs. Mays profile as follows.

Born in South Florida in 1963 as Nadine King, Nadine King-Mays grew up the second child in a family of five children. Education was an important part of her upbringing as her mother was a teacher then later a school administrator. As a youth, Nadine excelled in the arts and music as well as in academics. Her father, an avid history buff kept encyclopedic references to the U.S. Civil War and books regarding African American history and the slave trade, particularly the flow of Africans from the continent through Sierra Leone. Her mother was instrumental in tracking her own family history into the 1800’s and reinforced the importance of tracing family and cultural origins. The links between Africa and African Americans was an open topic of discussion in the home. These things at a very early age formed the basis of the connection that Nadine has always felt that African Americans needed to pursue and develop with Africa.

Upon graduation from high school in 1981, she attended The University of Dallas where she majored in Economics and sub-majored in Politics. She enrolled in the five-year MBA program in International business. As a student at UD, Nadine travelled to Europe where her Spanish and Italian language capabilities helped her to interact with individuals from other countries which reinforced her desire to work in an international setting. At the same time she had an interest in law and when she was accepted at the prestigious University of Pennsylvania Law School in 1985, she decided to attend.

In 1986, Nadine married Gregory Mays, and in 1987 they had their first child, who celebrated his first birthday the date that Nadine and Gregory graduated from Law School in 1988. Nadine was a notes editor for the Comparative Labor Law Journal, competed in Moot Court Competitions and whose team received the Jessup Cup Competition in International Law Best Memorial “Brief” award in the 1987 Mid-Atlantic Regional Competition.

Mrs. Mays and Foday Fofanah at the Global Conference on Ebola in Sierra Leone

Through the late eighties and nineties Nadine’s family expanded to four children and she worked as an associate in both large and boutique firms in Dallas. In 1994 she opened the King-Mays Firm where her concentration has been on legal counselling for business entities and transactional and commercial litigation. Her language capabilities have additionally allowed her to manage legal issues for Spanish-speaking individuals. The firm also manages transactional and litigation issues for churches and nonprofit entities and with the new immigration reforms will focus on immigration issues as well.

In 2013 Nadine met Foday Fofannah, a resident of the U.S. but a native of Sierra Leone. Though the original contact was business-related, the two began to discuss the plight of the people in Sierra Leone, a country that is resource rich but still suffering the ravages of the Blood Diamond War and the ever-present effects of colonialism.  In January 2014, Nadine and her Firm after discussion with Mr. Fofanah, his friends Ernest Cole and Harry Seilenga all from Sierra Leone as well as interested U.S. natives decided to incorporate the nonprofit group Sankofa Infrastructural. Sankofa has as its mission to look back and make changes that will have a positive effect on the people and structure of Sierra Leone. The Firm applied for 501(c) 3 tax exempt status in April 2014 and received its tax exemption designation in October 2014.

It is Nadine’s hope that Sankofa Infrastructural will be instrumental in building a cultural and economic bridge between Africans and African Americans, and that her children as well as the children of Sierra Leone, will benefit from an aggressive focus on cooperation, infrastructural development and progress.

To all Sierra Leoneans around the globe, let us reflect on the past and understand what psychologists say that, “holding onto our good memories – and leaving the bad ones behind – helps us to deal with unpleasant situations and retain a positive outlook on life”. We must focus our effort on how best we can utilize both our unpleasant and pleasant circumstances, as a way to positively influence our collective action in saving our people’s lives, and mustering our country’s prosperity.  As we approach the new year 2015, I hope we (Sierra Leoneans) can reflect on the good and bad experiences of 2014 (the year of Ebola), as a source of strength to boldly face any challenges, while at the same time becoming an instrument of positive change, and moving forward, irrespective of our individual political affiliation, and tribal and ethnic identity.

Happy new year and may God Bless and bring healing to our individual homes, our people and our country, Sierra Leone!

The Very Last Shot: Tribute to a F...