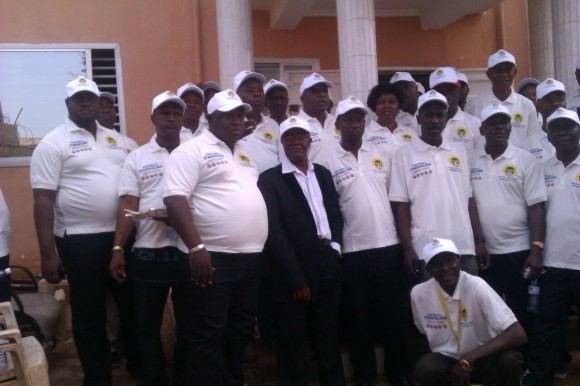 The officials, who perform various membership roles in the running of football in the country, also decided that all players and officials who are implicated of match fixing allegations should be cleared of such misdemeanour.

They have also formed a nine-man interim committee which, according to the group will run football in the country, starting on Monday 22 December for a period not exceeding six month.

Because of the Ebola crisis the stakeholders were required to secure a police permit in order to meet as a group but their request was rejected by the authorities.

They decided to coordinate by telephone conference calls to reach the decision before meeting later for a group photo which was a gesture meant to ratify their move.

They had vowed to convene their own extra-ordinary congress despite opposition by football’s governing body FIFA, who warned that any decision taken by the group will be null and void.

The football association had scheduled a Congress (not extra-ordinary) next month and this has been approved by Fifa. But the reaction from FIFA did not go down well with the rival stakeholders, who called for Fifa not to interfere.

They have however notified Fifa and the African governing body, CAF of their decision.

The other major decisions reached are the following: “The said committee shall also have authority to investigate and if necessary authorise the audit of the finances of the Sierra Leone Football Association, (SLFA).

“The interim committee is granted authority to put modalities in place for the running of various leagues’ throughout the country through the regional associations.

“That the members of the said interim executive are disqualified from being nominated /voted for any executive position in the congress to be held in July 2015.

However, the rival stakeholders are claiming support from the Sports ministry and the National Sports Council. But Fifa is unlikely to recognise their decision and Sierra Leone will risk a global ban.