Homepages
Your trusted place for Sierra Leone and global news
Trending News
HomeFeaturedRotary Club raises $14,250 in the US to Fight Ebola 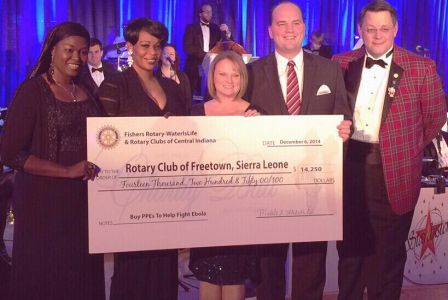 The Sierra Leone Rotary Club has helped raised $14,250 at a fund raising event in Indianapolis, United States to support the fight against the deadly Ebola virus which continues to claim more lives in Sierra Leone. The Rotary Ebola Fund raising which took place on Saturday, December 6th in Indianapolis was organised by the Rotary Club of Fishers Indiana in partnership with the Rotary Clubs of central Indiana and the Rotary Club of Freetown under the expert guidance of district governor Tom Branum Jr., renowned gospel artist, Gilleh Scholz and Mrs. Doreen Williams were special Sierra Leonean guests at the event. Gilleh thrilled the audience with her performance which was applauded. She later thanked everyone present for their support towards the charity event.

A cheque of $14,250 was donated to Rotary Sierra Leone to help procure materials for Ebola victims.

The Rotary Club has contributed greatly to Sierra Leone’s developmental strides.  The Rotary Club Sierra Leone has raised enough funds during the past four years for the construction of 100 water wells throughout Sierra Leone, four of which were specifically built for EBOLA treatment centres. Speaking to this press, Rotarian Dr. Adonis Abboud and Rotarian Christo Foster thanked the Rotary Club of Fishers Indiana as well as the Rotary Clubs of Central Indiana and all those that contributed to make the event a success. Dr. Abboud said Rotary Sierra Leone will decide at a Board meeting on how the funds will be utilised in the fight against Ebola.