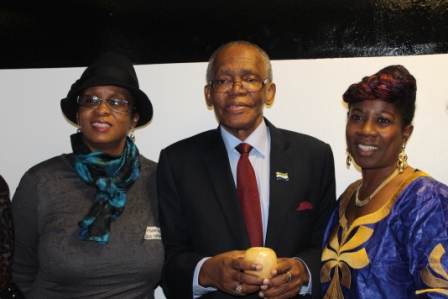 Sierra Leone’s High Commissioner to the United Kingdom this week made an impressive presentation at a high-profile well attended international conference aimed at raising massive awareness towards the fight against Ebola in West Africa.

His Excellency Edward Mohamed Turay was addressing a large audience of delegates from around the world who gathered to brainstorm  the way forward towards ending the Ebola crisis within the West African sub-region.

Making his address, Turay said it’s about time the world stepped up efforts and rallied behind Sierra Leone and other affected West African countries to eradicate the world’s most dreadful disease.

The conference was aimed at mobilizing the African Diaspora in the United Kingdom around Ebola and to provide a forum for professionals to come together to share information and develop strategies for future policies.

The High Commissioner outlined some of the steps taken by the President towards combating the disease including declaring a state of Emergency, and shutting down the country for three days, which enabled over 27,000 health educators to provide in person vital live-saving information to  every household in the country.

He said government also placed large swathes of the court under protective and corrective quarantine as well as re-allocating millions of dollars from other sectors to this public health crisis and life and death struggle.

The Sierra Leonean Diplomat said there is a huge need for medical personnel and resources with government estimating that at least 3,000 beds are needed to accommodate the influx of patients which he said, is less than half that amount available.

Another problem the government is facing, according to the High Commissioner is the insufficient number of health care workers at the frontlines to provide patients with the care and attention they need.

“Hospitals and clinics have been so strapped for resources that health authorities approved plans to keep Ebola-patients home and treat them there, until more beds materialize,” he said.

HE Turay seized the opportunity to salute efforts of his country’s international partners, in particular the United Kingdom, which he said has taken the leadership role in combating Ebola in Sierra Leone.  But I must also note that the fight is far from over.

Turay said Ebola is an unforgiving and a frightening disease – but, it can be defeated – if the world work together, in solidarity and with effective coordination, and scaled up engagement.

“We cannot afford to allow the spread of Ebola to outpace our response to the crisis,” the High Commissioner said.

The conference which took place at the Zanzibar Hall, South-east London, was organized by the Elbow Out Ebola People’s Campaign – a newly established broad-base people’s movement made up of grassroots individuals and organizations who are concerned about Ebola.

There were also presentations from the Ambassador of Guinea to the United Kingdom HE Paul Goa Zoumanigui, a representative of the Embassy of Liberia Anthony Selmah and the Nigerian High Commission which was represented by Faisal Mohamed Ibrahim.

Outside the Diplomatic corp were the Mayor of Lewisham Councilor Steve Bullock, who gave the opening remarks, the Sierra Leone Diaspora Ebola Task Force which was represented by Journalist and historian Ade Daramy and a representative of the London School of Hygiene and Tropical Medicine David Murana.

Addressing the gathering HE Edward Turay called on them to come to the rescue of Sierra Leone in a bid to rescue the situation following the escalation of the Ebola disease.

He said he has spent the last couple of months raising massive awareness to both the Sierra Leonean and Diplomatic communities to encourage health workers to go to Sierra Leone and help contain the disease.

He said his mission had been engaging in massive awareness campaign and had succeeded in establishing the Sierra Leone Diaspora Ebola Task Force which has been able to work in collaboration with DFID and other partners towards the Ebola crisis in Sierra Leone.

Head of Chancery at the High Commission Obai Taylor Kamara outlined some of the challenges his country is facing and that of his mission.

Kamara made reference to a call by President Koroma who has declared extraordinary measures to contain Ebola and called on those present to help his country get out of what he described as ‘a deadly situation.’

Present also at the programme were NGOs including Street Child whose representative gave a report on the efforts they are making including getting orphans and other Ebola surviving kids out of the street.

“Isolating and stigmatizing Sierra Leone will not help the situation,” said Peter Penfold.