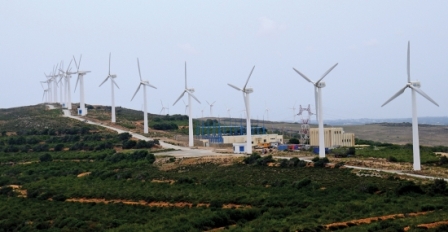 There is no country in the world that has been unaffected by climate change, and no continent in the world has been more affected than Africa – and that state of affairs appears unlikely to change anytime soon.  (Photo: A wind turbine farm in Tunisia, Photo: Dana Smillie, World Bank )

If global emissions continue on their present path, according to the latest report by the Intergovernmental Panel on Climate Change, Africa will heat up even faster than the global land average, and the temperature on the continent will rise by more than 2°C well before the end of the 21st century. Rainfall patterns will continue to change and climate change is expected to place even more stress on places that are experiencing water scarcity now.

“We are all aware of the latest findings of the Intergovernmental Panel on Climate Change,” said UN Secretary-General Ban Ki-moon at the June summit of the African Union in Malabo, Equatorial Guinea. “To meet the full scale of the climate challenge and seize the opportunities, we need an international framework that will support accelerated action by all nations and all sectors,” said Mr. Ban, who will host a summit on climate change in September in New York.

The summit will be held a year ahead of the time that nations agreed to conclude a global agreement on climate change.

Attention to the issue at the highest levels has waned since the world failed to reach a universal agreement in Copenhagen, Denmark, in 2009.

For the summit, Mr. Ban has called on leaders from government, business, finance and civil society to announce bold actions and initiatives that will make a difference in either reducing emissions or building resilience to climate change. The summit will not be a negotiation forum nor will the discussions be part of the negotiations of the United Nations Framework Convention on Climate Change (UNFCCC), a global environmental treaty.  Rather, the outcomes of the summit will be a host of action plans to be announced during the one-day summit.

While African countries have long maintained that they are victims of a problem that is not of their making, African negotiators and leaders have emphasized that they also view climate change as an opportunity to advance their development agendas. “You don’t have to go to school to see the impact of climate change in Africa,” says Fatima Denton, Coordinator of the African Climate Policy Centre at the Ethiopia-based UN Economic Commission for Africa. “We are all intimately aware of the water deficits and floods,” she said, adding that the summit would be about opportunities, not just vulnerabilities. “We need to turn the problem of climate change on its head” and take advantage of opportunities for Africa to lead, such as on deforestation, technology transfer, and carbon sequestration, which is a process under which carbon dioxide is removed from the atmosphere and stored in a reservoir.   “The ‘Africa Rising’ narrative will be a short-lived one unless we address climate change.”

Abraham Tekeste, the state minister for finance and economic development of Ethiopia, said his country’s economic transformation efforts “were embedded in commitments to reduce its carbon footprint through a ‘climate resilient green economy’ strategy.” He said that Ethiopia was working to contribute to global efforts to mitigate climate change by harnessing sources of renewable energy. He expressed confidence that the September summit would send a strong message that could mobilize support to expedite climate negotiations.

But there is also a desire for the summit to deliver more than a message. According to the spokesperson for the African Group in the UNFCCC negotiations, Seyni Nafo of Mali, the summit will provide countries with the opportunity to suggest their plans of action. “It’s a positive agenda. It will bring very concrete initiatives, not just statements but ambitious initiatives. It’s very helpful.”

But attendance of world leaders was essential, he stated emphatically. “It sends a strong signal for next year. If key players come to New York, there could be a strong and ambitious outcome in Paris. It would be a good sign for us. Good attendance could make a difference.” Many African leaders are expected to attend, led by Tanzanian President Jakaya Kikwete, the coordinator of the African position on climate change.

African countries are looking to the summit to help raise the profile of climate change at the highest level, Safo said. “It has to put climate change on the international agenda with a capital ‘A’”.  Not since Copenhagen, he said, have leaders come together to address the issue. “The summit puts climate change back on the table.”

Africa will also be listening for indications of a willingness to help capitalize the Green Climate Fund, a UNFCCC mechanism that facilitates the transfer of money from donors to poor countries to help them mitigate the effects of climate change. Mr. Nafo said a number of countries had indicated that they viewed the summit as the place for leaders to make pledges. “This is a major expectation for us,” he said.

According to Mr. Nafo, a number of initiatives identified at the preparatory meeting in the United Arab Emirates’ capital of Abu Dhabi in May could also address the finance gap before 2020, when the new agreement goes into effect. The initiatives, he said, helped broaden action by including all interested parties, including business and finance.  “The only way to meet the challenge is through a broad coalition.”

The initiatives cover a range of areas that include renewable energy, energy efficiency, agriculture, cities, forests, cities, transport, pollutants and finance. Some of these initiatives would directly impact African development efforts, such as an initiative to build a clean energy corridor in East Africa. Mr. Nafo said there was particular interest in initiatives on energy access and poverty through the Sustainable Energy for All programme. The key, he said, was to see how the partnerships will be implemented and what they will achieve.

Still, Mr. Nafo said, there is a long way yet to go to. “We need a sustained effort. We can’t just have a one-off event,” adding that it may pay to have periodic climate change summits.  “Climate change is so important for development that there is a need for leaders to engage with all stakeholders every two years or so.” 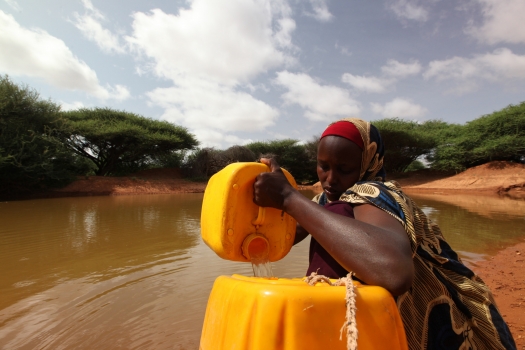