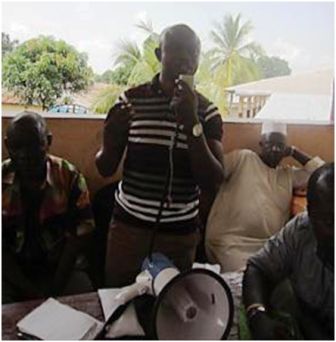 Following the restructuring process by the AMR Gold Exploration Company Board of Directors in the United Kingdom, a Sierra Leonean has been appointed to manage the activities of the company in Sierra Leone.  (Photo: AMR Gold Senior Country Manager-Mohamed Sultan Daffae)

This appointment came in the heels of the recent sacking of the erstwhile Directors, Rafael and Israel Shraga (Israeli nationals) that purported themselves as Sole Owners of AMR Exploration Company in order to defraud foreign investors with the pretext of selling shares to those duped investors. As this fraudulent attitude breezed out, the Board of Directors of the company promptly held a meeting and passed a resolution supported with a letter appointing two new British Directors to deter the fraudulent plans of the former Israeli Directors.

This action was also supported with a High Court Order, signed by the Master and Registrar and effected by the Presiding Judge, Justice A.S.Sesay.

As part of the transformative strides to kick start effective operations, the Manager, Mr. Mohamed Sultan Daffae yesterday made courtesy visits to the company’s operational areas in Sella Limba and Sanda Loko Chiefdoms in the Bombali District, Northern Sierra Leone to sensitize the community people on the dreaded Ebola Virus Disease (EVD) and to further explain reasons why the company ceased operations for the three consecutive months. Among the visited communities are: Kathanta, Kayigrana, Kadabi, Kasasie,Laminaya ,and Kamalo among others.

Speaking at the Kamakwie Native Administrative Court Barry, Mr. Daffae revealed that the items donated is to demonstrate that AMR Gold is ready to support the Government in ensuring that the Ebola war is over. According to him, some companies have folded up and those that stayed, redundant their staff as a result of the deadly Ebola disease.

He said: “We are in a crisis period and the President, Dr. Ernest Bai Koroma is not happy with the current death toll. He is impatient to free the country off the Ebola virus and therefore called on all Sierra Leoneans to collectively join him to win the Ebola war. As a company, we see this as a wakeup call and our Board of Directors have decided to provide all the needed support to our operational areas. On behalf of AMR Gold Board of Directors, I asked that you incorporate us in the Ebola Task Force to contain the virus in this part of the country.”

Mr. Daffae called on the community stakeholders to continue to provide the enabling environment so that AMR Gold would provide sustainable jobs for the youths. He maintained that “an idle brain is the devil’s workshop,” reiterating that if job is not provided for the youths, they will decide to go elsewhere to seek for their livelihood without paying attention to the current Ebola disease ravaging the country.  He appealed to the people to adhere to all precautionary measures instituted by the Ministry of Health and Sanitation. That, according to him, is to prevent them from Ebola disease which is no respecter of human beings.

Receiving the items plus Five Hundred United States Dollars (One Million Five Hundred Thousand Leones) on behalf of the Member of Parliament, the Councillor of Ward III, Foday Amara Yansaneh said the ruling Government is proud of AMR Gold since the inception of their activities in Sella Limba Chiefdom. He went on to explain that after discovering the new Ebola cases, they said homes were quarantined but food was not available for them for the 21 days period. I became frustrated, he said, noting “My worry was how to get them food so that their hopes would be restored.”

Councillor Yansaneh said he travelled to Makeni to secure food through the District Medical Team but there was no head way, stressing that a day later he received a phone call from AMR Gold Country Manager who asked him about the felt need of the community.

“I explained to him the problem  and advised me to wait,” he said, adding “Within few minutes, Mr. Daffae called and told me  that AMR Board of Directors have decided to provide food for the quarantined homes  and other needed items to contain the Ebola virus.” He re-echoed that AMR Gold have never made a promise without fulfilling it.

Similarly, the Chiefdom Speaker, Momodu Kamara popularly known as M.J disclosed that the Paramount Chief-Kandeh Luseni II was absent due to ill health. He told his audience that the Chiefdom will continue to support AMR Gold as long as they continue to work within the ambit of the law.

By AMR Communications Unit Stay with Sierra Express Media, for your trusted place in news! 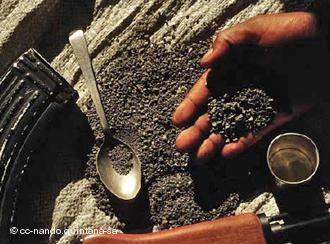