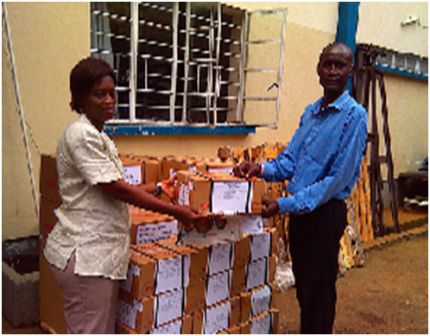 The items distributed include hundreds of 50kg bags of rice and other assorted food stuff to the Robis I and Masiaka villages in the Koya Chiefdom, Mafoimara and Rothamgbai villages in the Morforki Chiefdom and quarantine homes in Masimra Chiefdom all in the Port Loko District.

Orphans who parents died of Ebola with their grandmother at Mafoimarah

Presenting the food and assorted items, AIM Director underscored that the donation was part of her organization’s support in complementing Government‘s strides to contain the Ebola outbreak adding that it was also to step up intervention from social mobilization and sensitization to responding to the needs of families affected and quarantined homes in Port Loko District.

She said PfeffeminzGreen, a German based Organization provided the funding to help various households   and communities in the district after her organization sent a request on the need to help Ebola orphans and other affected persons.

The National Director highlighted the impact of the disease on mostly women and children warning that if people do not abide by the preventive measures, more deaths would occur and called on all   to abide by the measures through the washing their hands with soap and water, avoid body contact, washing of dead bodies and eating bush meat.

Madam Turay commended Government for the selfless initiative   and response stating that she is of the strong conviction that the outbreak would be put under control but maintained that people must abide by the advice from medical personnel whose role is to educate them on the dangers of the virus.

She further disclosed that majority of Ebola deaths have to do with young people, women and medical personnel reiterating that people should be   convince, resilient and with the strong mind to curb the virus.

Member of Parliament representing Constituency 057, Hon. Abubakarr Koroma thanked   the AIM Director and partner   especially Stella Rothenberger for such a huge donation adding that the quarantine people of Port Loko District are in dire need of help particularly in terms of basic food.

He said the donation came at a time   when needed most and appealed for more support especially for the quarantine homes and villages in the district.

Section Chief of Mafoimara village expressed thanks and appreciation to Madam Rugiatu Neneh Turay and partner especially Stella Rothenberger for their efforts to save them from hunger adding that AIM is the first organization to have reached almost every village and Chiefdom in Port Loko supplying them with hundreds of bags of rice and other assorted food items.

Beneficiaries lauded AIM and partner for the donation and wished them God’s richest blessing in their entire endeavors.