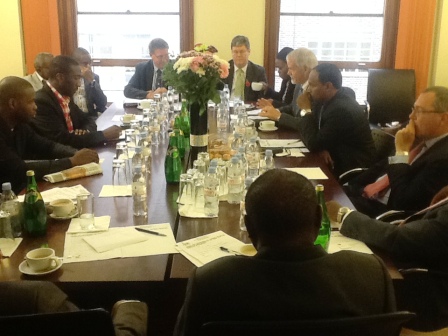 Sierra Leone’s Petroleum Directorate Unit today hang heads in London with representatives and partners in the oil and gas industry to garner support in response to President Dr. Ernest Bai Koroma’s clarion call for all hands to be on deck towards the fight against Ebola.

But as Sorie Sudan Sesay reports, the one-day round table conference attracted over thirty representatives of oil and gas companies operating in Sierra Leone…

Sierra Leone’s Petroleum Directorate Director General has said in London that the Ebola crisis facing Sierra Leone is a national tragedy and even worse than the rebel war.

Raymond S. Kargbo was addressing a group of oil company representatives at the Sierra Leone High Commission to re-echo President Dr. Ernest Bai Koroma’s clarion call for hands to be on deck in the fight against Ebola which he described as ‘a common enemy’.

“The Ebola Virus Disease is not just a common enemy to Sierra Leoneans or West Africa, but the rest of the world described by the WHO as the most severe acute public health emergency in modern times.”

Kargbo said there has been a determination on the side of the International Community and development partners to combat the spread of the disease and called on the investors to lend support to government’s efforts in the fight against Ebola.

He said Government needs support to set up its structures to coordinate this support and that President Koroma recently established the National Ebola Response Centre (NERC) to coordinate these efforts and fairly and properly allocate resources.

’As a company undertaking exploration and/or reconnaissance work in the Oil and Gas industry in Sierra Leone, you have a responsibility to act as a global corporate citizen and stand firm with the Government in its effort to tackle and contain the spread of the disease’’.

Kargbo said the Ebola disease is an unforeseen tragedy in modern times and called for the investors’ quick response of the investors in a coordinated way.

He emphasised the serious nature of the disease in West Africa and drew reference to the Disaster Emergency Committee which warned of a catastrophe without a coordinated effort from all partners.

Kargbo catalogued a list of government’s priorities including Community Ebola care and holding centres (at least 169 centres), Treatment Centres, Personnel, Equipment, Logistics and more Laboratories to mention but a few.

A representative of Chevron, Sahr Ngegba representing Sierra Leone Exploration said government has put in place strategic plans of what they intend to do and called on the Petroleum Unit to work alongside those plans.

The Legal Advicer of the Petroleum Unit Sally Khatumol giving her vote of thanks said as Sierra Leoneans they have a very difficult task which they cannot do alone and therefore specifically wants representatives of oil and gas companies present to come out of from within their social and corporate responsibilities to come to the rescue Sierra Leone.

She said as members of the Petroleum Unit, they have a responsibility now to have a coordinating unit within the directorate and thanked the oil and gas investors for taking time off their busy schedules to attend what she described as ‘a very important meeting.’