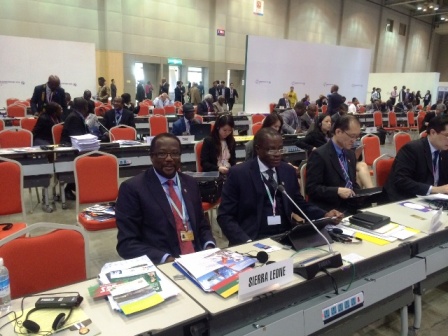 The Conference, commencing October 20th and ending on the 7th November, will see Member States deciding the future role of the organization, thus determining its ability to influence and affects the development of information and communication technologies the world over. Held once every four years, the ITU Plenipotentiary Conference is the top policy making body of the organization and attended by member states from across the globe.

Ambassador Golley’s statement at the Conference was based on the role of ICT in the fight against the Ebola Virus Disease in Sierra Leone, which he said, has become apparent crucial in dealing with the aspect of communication access and  the general flow of information, given the hundreds of people who have died as result of the virus.

Ambassador Omrie Golley informed participants at the Conference that the Government of Sierra Leone views access to information “as a central strategy in the fight against Ebola” and therefore requested the support of the ITU in bolstering the flow of information in this country. “With your assistance, deprived and isolated communities can be enshrined in the ongoing sensitization programs, and we can simultaneously   Complement the efforts of our Ministry of Education in its distance learning program via radio broadcast to homes”, he said.

According to Ambassador Golley, the ultimate goal of the Sierra Leone Government is to break the chain of transmission of the virus. but he, however acknowledge that such a goal is very challenging to accomplish especially in a country where people are used to handshakes, hugging and washing of dead bodies before burial, wish are all means of transmitting the virus.

His Excellency Omrie Golley also dilated on the socio-economic impact of the virus in the country, which he said, “is well beyond our imagination” He also referenced the stigma attached to the virus, especially for survivors. Sierra Leone, he said will readily accept whatever support available from the ITU, but which is pertinent to the fight against the virus. “Your prompt and timely response to our request could be vital at this crucial period”, Ambassador Golley concluded.

Statement of AUC Chairperson on Eb...