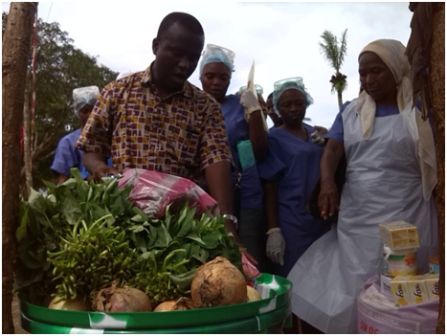 Marampa Chiefdom in the Port Loko District happens to be one of the most hot spots areas where a good number of positive Ebola cases are coming from. This ugly situation has been a cause for concern for most authorities in the District. The Saint John of God Catholic Hospital that is otherwise known as Mabesseneh Hospital in Lunsar Town has taken the bull by it’s horn to ensure that it demonstrates the work of a ‘Good Samaritan’ in its area of operation. In collaboration with Friends of Maternity Hospitals, the Hospital Management is currently implementing a project that caters for quarantined homes in the Marampa Chiefdom.  (Photo: Brother Michael M. Koroma and Madam Isha Daramy Kabia)

A nongovernmental organization that is based in Ireland, Misean Cara together with Saint John of God Brothers have provided the sum of Le100million for the provision of not only food items but also provide medical support to sick people in the various quarantined homes in the Chiefdom. After thorough needs assessment was carried out in all twenty quarantined homes in the Chiefdom, the supply of enough food items was done on Tuesday and Wednesday 21st and 22nd October 2014. The feeding and medical support for the rest of the twenty one day in each home will be followed by a daily visit of nurses to ensure that medical attention is given to the sick or any Ebola suspected case.

The Manager of the Hospital, Brother Michael M. Koroma told this press that after they have taken a thorough look at the climax of Ebola infected cases, they have found out that people are not staying in quarantined homes because they don’t have the basic amenities that will keep them at home. “We are going to provide essential services like treatment for the sick, provide drugs and psychosocial care,” he said, and added that together with Friends of Maternity, the project will for now target about 200 people in all 20 quarantined homes; and that they are provided with items like rice, palm oil, cassava and potato leaves, sugar, tea leaves, bucket for drinking, water and other condiment for cooking, tooth paste and brush, soap etc, to each home. “We will be monitoring them during the 21days to treat sick people and ensure that those with severe cases are taken to the hospital for proper treatment,” says Brother Koroma, pointing out that they will also provide logistics and the right protective gears to health workers that will be doing the job.

This, he said is all about complimenting the work of government. He called on the government to monitor the activities of some NGOs that claiming that they are doing lots of work in the north during the Ebola period. He reiterated the fact that most of these NGOS are not doing anything on the ground.

Some of the challenges that need greater attention, he said include lack of respect for community authorities especially in adhering to prevention methods; placing quarantined people in a single house, which expose them to risk. The sleeping pattern of people in those homes, he said has a tendency of infecting others. He suggested that people quarantined must be evacuated and placed where they are monitored closely.

Madam Isha Daramy Kabia of Friends of Maternity Hospitals pointed out that lots more needs to be done in the various communities as Ebola fight should involve everybody. “We need committed people to take care of quarantined homes,” she said. The Veteran Nurse told this press that people are moving from their quarantined homes because there is nobody to take care of them.

She further said health workers like Nurses need thorough training on infection control, which was why most of them had to die of the Ebola Viral Disease earlier on.