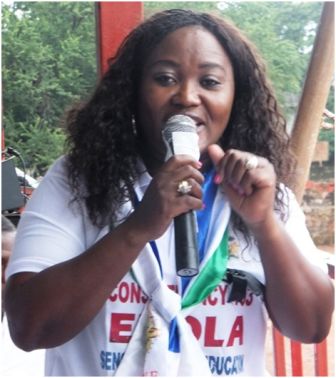 The people of Constituency 103 on Wednesday, 17th September, 2014 launched a very strong Ebola campaign at the Brima Attouga Mini Stadium. The campaign attracted people from all sectors of life such as imams, pastors, chiefs, traditional secret society leaders and youth who prone to Ebola. (Photo: Honourable Rosaline Jariatu Smith Speaking)

The Member of Parliament for the Constituency, Honourable Rosaline Jariatu Smith said that she invited the religious and traditional leaders because they deal with a number of people daily and some have still not accepted that Ebola is real.

The honourable informed her constituents that Ebola is real and should be treated with all seriousness. ”Be each other’s keeper and be mindful of visitors that come to you” she warned them, she advised them to employ the Koinadugu tactics to fight Ebola and to report any suspected case to the authorities.

She promised that the veronica buckets will always be replenished with water and other materials such as medicated soap for members of the constituency on a regular basis.

”Ebola centres on attitude and behaviour, therefore I want you all to put on the right attitude to stop Ebola” she advised. She further called on members of her constituency to take the precautionary measures that the Ministry of Health and Sanitation has prescribed.

The honourable called on Sierra Leoneans diaspora to come and help the government rather than staying abroad criticising the government.

The National Coordinator and Second-in-Command of the Attitudinal and Behavioural Change (ABC) Secretariat Madam Nanette Thomas called on Sierra Leoneans to think as one. She cited America, saying that when terrorists bombed the World Trade Centre there were no Demoracrat or Republican because all of them rallied behind the American Flag.

Madam Thomas reiterated that Ebla is real. She asked them to change their attitude towards the fight against the viral disease; ”the rapid spread of Ebola is as a result of our negative attitudes towards it” she told them.

She further stressed that when the epidemic started some people were saying that it was a political game to reduce the population of some districts, but she encouraged people to trivializing the fight against this disease.

The National Coordinator of the Secretariat advised them to stop stigmatizing nurses by branding them as Ebola carriers. She stressed that the nurses are fighting a war to save the lives of Sierra Leoneans.

The Chairman of the ceremony Mr. Momoh Kamara noted that the campaign is not a political issue because Ebola does not pick political colours, adding that we should take the struggle against Ebola as a national fight.

Mr. Kamara also said that the safest way to fight against the disease is to heed to precautionary measures prescribed by the Ministry of Health and Sanitation.

The Sierra Leone People’s Party (SLPP) Constituency Chairman, Lusani Kemokai reiterated that the war against the Ebola epidemic is a national concern because it has affected all facets of life.

He stressed that the time for politics will come but at this time everyone should help the government to eradicate Ebola out of the country because we cannot do politics with Ebola.

The representative of the National Democratic Alliance (NDA) Party Mr. Abdul Karim Kanu agreed that Ebola should not be politicised because it is a national concern.

He described the present spate of Ebola in the country and the sub region as a warning shot because World Health Organisation has predicted that twenty thousand people will be affected in the sub region.

He also noted that the epidemic has seriously affected our development strides, ”if we do not come together and comprehend the need to fight Ebola it will take our development backward” he emphasised. He also stressed that one will only talk about road construction without Ebola, noting also that even though people are aware of the virus there is need for more sensitization.

Members of the constituency performing an Ebola melodrama

The program came to an end with an Ebola sensitization melodrama and a distribution of hand washing buckets and other antibacterial materials to be positioned at strategic locations.