Homepages
Your trusted place for Sierra Leone and global news
Trending News
HomeFeaturedAs she continues to care for the poor, Minister Konomanyi donates to the aged

As she continues to care for the poor, Minister Konomanyi donates to the aged 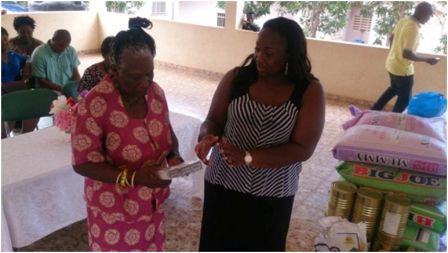 As she continues to care for the poor, Minister Konomanyi donates to the aged

As part of her demonstration of love and care for the poor and needy, Minister of Local Government and Rural Development, Mrs. Diana Konomanyi Kabba on Saturday 27th September 2014 donated food stuffs worth millions of Leones to inmates of the King Georges Home for the Aged at Hastings village.

The donated items included 10 bags of rice, over 50 liters of cooking oil, bags of onions, cartons of fish, cartons of tomatoes, cartons of milk and Ovaltine and a physical cash to help boost the morale of staff at the Home.

Handing over the items to the management of the Home, the Iron Lady, Mrs. Diana Konomanyi Kabba said the aim of the presentation was part of her personal support to the needy and poor and also her personal contribution to the national fight against Ebola in the country.

She said the disabled and aged are very much important asset to the country’s resources, adding that the government of President Dr. Ernest Bai Koroma cares very much for this sector of the society, which was why she chose to champion the course.

“I am one of the messengers of President Koroma and I will personally do all in my capacity to ensure that his dream to provide for the poor and needy is achieved” she asserted.

The iron lady assured that her government will never neglect the aged and disabled communities in the country, whilst noting that government was in serious position to prevent them from contracting the Ebola Virus Disease.

She used the forum to call on the aged and disabled persons to remember President Koroma, his government and Sierra Leone as a whole in their prayers and to continue calling on God’s intervention to clean the country off Ebola.

Mrs. Kabba acknowledged that the deadly virus has posed lots huddles to several development strides in the country that were aimed to be achieved by government.

“Much of our design development programmes set by government to transform the country have be stalled owing to this deadly virus,” Diana stated, whilst calling on staff of the King Georges Home to be careful in the manner in which they are coming in and going out of the Homes because Ebola is real and it is here in the country. She further assured her continued support to the Home at all times.

Receiving the items and thanking the minister on behalf of the Home, Mr. Vivian Dilworth, one of the aged, expressed thanks and appreciation to the minister for thinking of them at this time of need.

He prayed for a continued relationship between inmates of the Home and the minister, whilst assuring that the donated items would be used judiciously. He said the donation came at a time when the Home was almost running out of food and its inmates starving. He called on other philanthropist to copy the footsteps of Minister Konomanyi Kabba and help them with more food and basic supplies.

It can be recalled that King Gorges Home has not been the only place supported by Mrs. Kabba since the outbreak of Ebola in Sierra Leone. She had successfully toured the country donating similar food stuff and items to the needy and less-privileged persons.