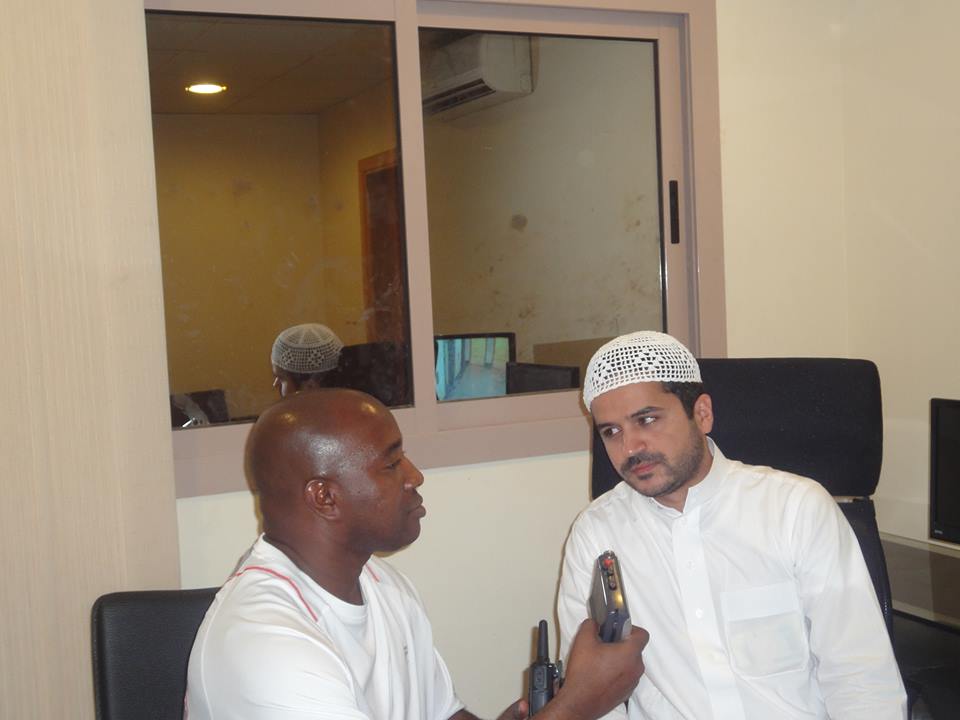 He has visited Sierra Leone thrice. He describes his visits as “very successful.” Saleh Alzahrani is a Saudi national who admires and loves Africans. He is the General Manager of Manaber Investment Company with offices in Mecca and Jeddah in the Western region of the Kingdom of Saudi Arabia. He studied at the Ibn Sina National College for Medical Studies. After completion of his medical studies, he went into private business. You can’t talk about Real Estate business in the Kingdom without mentioning his name. He has other lucrative businesses in and out of this country.  (Photo: One on one with Saleh Zahrani.)

The annual Muslim pilgrimage has become a lucrative business in recent years, proving a great financial asset to the economy of the oil-rich Gulf nation of Saudi Arabia. The highest rents in Saudi are found in the holy city of Mecca. Owners of hotels close to the Grand Mosque of Mecca ask for over $ 600 a night. Super-tall buildings are filling the Mecca skyline at an unstoppable pace. The ancient city’s centuries-old sites are giving way to glitzy luxury hotels, which are not affordable for many pilgrims.

Saleh in his Mecca office

Fortunately for Sierra Leone pilgrims, Saleh has been providing accommodation for them at an affordable cost over the past three years. He became interested in helping our pilgrims since the Government of His Excellency; President Dr. Ernest Bai Koroma manifested interest in the organization of Hajj – a programme that was handled by agencies.

Saleh says he admires a leader born to a cultured and dedicated Christian family to manifest interest in the Muslim Community. “I think Sierra Leone pilgrims deserve support,” the 38 years old Saleh said in a recent interview I had with him at his Mansour Street office in down town Mecca. He is believed my many Sierra Leoneans to be a true friend of their country.

In my interview with him, he was also overwhelmed about what he   discovered about the West African State of Sierra Leone in terms of her natural endowments, friendliness, conducive environment for business, security and stability, and according to him, the determination of His Excellency the President, Dr. Ernest Bai Koroma to take Sierra Leone to higher height.

He says investors should help President Koroma in his reformation drive aimed at making Sierra Leone a middle-income country by 2018. During his visit to Sierra Leone, he told me, I observed that your President is ready for real business; I mean business that will uplift the country, especially when that post-war nation has climbed 20 places in the World Banks’ annual business activities ranking in the last six years.

Since his visit to Sierra Leone, the number of investors that contacted our Embassy for business purpose has increased tremendously and there is every possibility that many of them will invest in our country because of the confidence and trust they have in Saleh Zahrani.

Sierra Leoneans living in the Kingdom are happy that investors in this country are expressing business interest in their country; something which had never happened before. These Arab businessmen now have interest in doing business in Sierra Leone because they believe in the leadership of Sierra Leone and the business regulations that exist in the country.