Is this a political hostage? Third term! 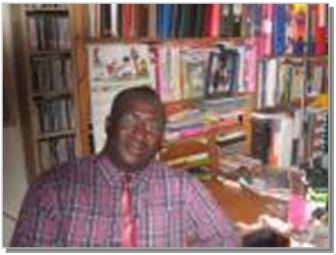 Is this a political hostage? Third term!

I have heard the rumour before about the call for President Koroma’s third term re-election. When I first heard the news, I treated it as insignificant because I had the feelings that we Sierra Leoneans are too good to be taken for a political ride to de-democratisation process.  However, I kept following the rumour, which has now turned to a political debate.  As a regular reader of Sierra Express Media, I said to myself I will write an article on this matter, but I nearly gave up because fellow Sierra Leoneans in the UK and those I spoke to on the phone in Sierra Leone about this subject all said the President is not going for third term and he will adhere to his constitutional mandate.  However, having thought about it again and reading from a recent article titled: “Third term tornado – will Ernest be another Putin?” I decided to join the debate as politics is everyone’s business or you let fools rule you. (Photo: author, Momodu Mansaray)

The friends I spoke to both at home and abroad have similar opinions on this matter.  In summary, some told me that it will never happen while others raised concerns about previous APC political strategy to maintain power.

In my view, the failure of President Koroma to clarify the situation during a recent event at the ruling All Peoples Congress’ (APC) headquarters in Freetown where he commissioned hundreds of wheelchairs for persons with disability raised serious concerns as to whether it is a political strategy to continue to assess the populace’s opinion regarding this subject.  The President’s failure to clarify the situation to date has persuaded me to ask this question: “Is this a Political Hostage?”  Is President Koroma using time to assess the people’s opinion on this matter?  If so, then it is a kind of “Political Hostage”.

Before I go into the details of this article, let me make myself clear I am a personate APC supporter so this article should not be treated as if it is written by an opposition member who is against a third term presidency.  I am APC, I have always been APC and I will continue to be APC, but the truth must be said. In my view a third term for President Koroma would not only be a set back to the growing democratic process and rule of law, but it would also be a serious Party Political miscalculation that will haunt us for years to come.

Under President Siaka Stevens he managed to manipulate the constitution for his own personal gains at the expense of the party’s credibility.  After the party lost power in a disgraceful manner, we came back to rule within a reasonable time, thanks to a combination of different factors – political shrewdness on the part of Koroma, Sierra Leone People Party (SLPP) infighting, which created serious doubts in the minds of voters and also their conservative political culture let them down.

I think a public gathering such as the one President Koroma attended was a perfect place to clarify the situation, but instead he gave what I would describe as a typical ‘political answer’.  In summary, he stated that he respects everyone’s views and opinions, and as a president and citizen, he is entitled to his opinions.  He went on to say that “at the right time he will exercise his rights to express his personal opinion on the calls of AFTER U NA U.

I think a political game like this is dangerous.  Sierra Leone democratic process is very young and any political uncertainty could be misinterpreted by some section of the population.  Some people have already started pointing fingers at the ongoing amendment of the 1991 Constitution as a gateway to a third term.  The 1991 Multiparty Constitution enacted by the then APC Government under Joseph Saidu Momoh makes it very clear about the terms of Presidential limit.

I have no doubt that President Koroma is a democrat who believes in the principles of modern day democracy, but I don’t know whether he would be able to resist pressure from some members of the APC party who are advocating for a third term.  The truth is while APC has a history of progressive development it also has its dark side of manipulating the constitution for the benefit of the few.  Here I quote A.K. Koroma in his book the Agony of a Nation:

With all these problems swirling…President Stevens hinted at resigning… but sycophants would not let him.… Delegations from several districts were organised by top politicians to plead with him not to go (A.K. Koroma, the Agony of a Nation, Andromeda Publication, p, 31).

This gave the then APC leader and President of Sierra Leone the moral ground to hold on to power despite the bad economic state of the country.  I was surprised to read that, the first blind Cabinet Minister in Sierra Leone, said the disabled community were ready to sacrifice their lives for President Koroma to get a third term in office.  He further pleaded that President Koroma does not turn down his people by denying their call.  I commend the Minister for his bold speech, but I disagree with his call for third term.  The most disturbing thing contained in his statement is the element of violence – ‘sacrifice their lives’.  This means if public opinion is split in halves APC third term advocates would try to use force to achieve its goal.

Those advocating for third term Presidency are not only setting a bad precedent for the democratisation process to grow, but an indication of greedy and self-centred politicians who will do anything to maintain power.  Has APC not learn from the past that any attempt to manipulate the constitution is a gate way to social disturbances?

I agreed with the president that as Sierra Leoneans and free citizens we all have the rights to freely express our views, but what he failed to realise is that any Sierra Leonean that holds high profile public office is accountable for what they say in public.  The Office of the President is a high profile one and President Koroma as the president must know that any political uncertainty needs clarification at the earliest possible time.

I sympathised with those who are arguing for President Koroma to go for third term re-election.  I understand their argument, which is President Koroma has done well during his two terms of office, but their argument holds no water.  I like President Koroma as a person and as a politician simply because he has backed political rhetoric with positive actions evidenced nationwide.  Just to mention few  infrastructural development under his tenure – Sierra Leone roads network has improved, Electricity has improved, Health care has improved, arguably employment has improved, the economy is turning round for the better, peace and stability have been maintained and most importantly he has brought discipline within the APC party and restored credibility as a functioning political party.  All these developments are good, but in my view, they are not justifiable for an amendment of the constitution to allow him a third term of office. President Koroma was and is paid to do the job he applied for and succeeded.  His legacy will be remember either in good or bad and in this case I would like to say his legacy if he sticks to his constitutional mandate would be remembered as positive development not only within Sierra Leone, but certainly in Africa.  Democracy in Africa is a work in progress, it is good to take a step forward, but sad to take two steps backwards.

I will conclude this article by highlighting the pros. and cons. for a third term presidency.

There may be more pros, but so far these are the ones I can think of.

Now let me identify the cons:

Having indentified the pros and cons, I feel that it is time to salute President Koroma for his achievements and begin to wish him good bye. Sierra Leone Political democratic process has no place for third term and it should not be encouraged. Personally, I commend President Koroma for his achievements. I must admit that I was one of his critics when he just took power in 2007. In Sierra Leone we tend to glorify our leaders before they deliver the goods – bad politics. I join the many level headed and democratically minded Sierra Leoneans who thinks that President Koroma is too decent to attempt a third Presidential contest. It is not about who has the political maturity to succeed him as party leader and presidential candidate, but it is about a democratic process that needs sustainability. A process investors respect and have trust in the rule of law. I would like to see him retire with all the dignity befitting an outgoing Head of State. Enjoy your retirement Honourable.

Women in Governance, the case of K...