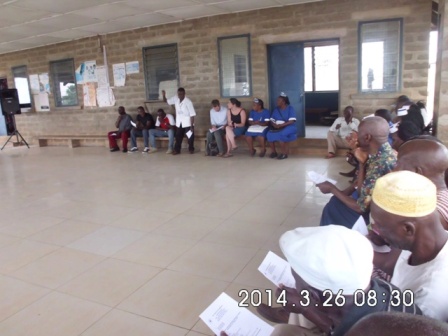 The Kenema office of the Anti Corruption Commission (ACC) in continuation of its public education drive has held a well attended customized sensitization meeting with the management, staff and students of the Nixon Memorial Nursing School and Hospital at the Under Five’s Clinic of the hospital in Segbuema Town, Njaluahun Chiefdom Kailahun District on Wednesday the 26th of March 2014. Welcoming the ACC, Principal  Teacher of the Nixon Memorial School Mr. Solomon Musa Vandi who served as chairman  thanked the commission for its rightful thought to meet and sensitize them on corruption issues. He stated that the doors of the hospital were always open to the ACC.

Stating the purpose of the meeting the District Coordinator of the ACC Mohamed  Sylvanus Blake stated that the engagement was part of the commission’s mandate to educate the public on the existence of corruption and the need for every Sierra Leonean to join in the national fight so that the socio-economic needs of all citizens will be met through the fair and transparent management and distribution of the resources of the state. He emphasized that corruption benefits a small group and impoverishes the vast majority. He stated that if the national fight against corruption is one the country must win, depends on the undivided support of all and sundry especially in the area of reporting allegations of corruption to the ACC. He encouraged his audience to break the culture of silence and speak up against corruption. He ended that it was better for people to convert from corruption than to be convicts of corruption.

Peter Baio Kamara the Ag. Regional Manager East in his statement gave a brief background on the establishment of the ACC in 2000 by an Act of Parliament and the new act of 2008 which increased the corrupt practices from nine  to twenty seven and gave prosecutorial powers to the commission. He explained the operations of the ACC and maintained that the commission emphasizes on the prevention of corruption than the prosecution of corrupt offenders. He stated that the ACC was more resolved than ever before to lead the national fight against corruption to a winnable end with the unflinching support of all. He indicated that as medical practitioners they should love our profession and work with integrity as it is a noble job. He ended by noting that all should be vigilant especially in the area of reporting all instances corruption to the ACC.

The Head of Investigations in the East Mr. Felix Kabba entreated his audience on some of the practices that constitute corruption as contained in the A C Act of 2008 and how to report to the ACC. He stated that this was not only to guide the personnel present against corruption but to encourage and capacitate them to recognize and report instances of alleged corruption to the ACC.  He stated that corruption was more of an integrity issue and encouraged his audience to dispense their duties with integrity, transparency and accountability. He high-lighted some of the eye-catching offences in the A C Act of 2008 that apply to the operations of the health sector and urged his audience to play within the rules. He cautioned nurses and public officers not to solicit or accept advantage for their official works. He warned against the misappropriation of public or donor funds as these funds are meant for the benefit of the people they are intended for.

In his statement, the Medical superintendent Dr Tamba Missa thanked the Acc for the consideration, especially for venturing into Segbwema. He recalled that some time last year the Commission was in Segbwema on a public education drive on the Free healthcare, the service charter and a range of corruption related issues. He assured the ACC of his institution’s support to the national fight and urged the commission to continue such visits.

Parliament sets up committee to pr...