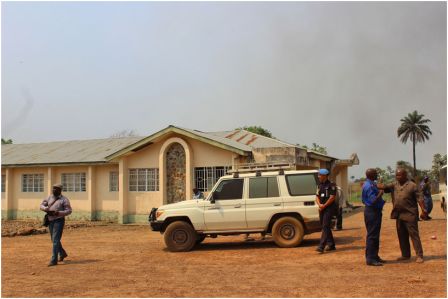 26 March 2014 – “With some of the most perfect palm-lined sands on the continent, it won’t be long before Sierra Leone takes its place in Europe’s packaged beach-holiday scene.”

That’s how the Lonely Planet describes Sierra Leone today. The travel guide also calls Sierra Leone “one of West Africa’s safest destinations” – an inconceivable description of a country that a little over a decade ago made headlines with unspeakable atrocities committed by teenage soldiers in the course of a brutal civil war.  (Photo: UN Police and security sector experts from the UN Development Programme (UNDP) on a visit to eastern Sierra Leone to assess the security situation in the region bordering Guinea and Liberia. UN Photo/Silke von Brockhausen)

On top of that, Sierra Leone – once home to the largest peacekeeping force in the history of the United Nations – now even sends its own soldiers as UN peacekeepers to trouble spots around the world.

“There is no reason for a peacekeeping or a peacebuilding mission in the country anymore. The country is at peace,” said Jens Toyberg-Frandzen, Executive Representative of the Secretary-General and Head of the UN Integrated Peacebuilding Office in Sierra Leone, known as UNIPSIL.

March 31, 2014 marks the official end of UNIPSIL, the third and final phase of a robust UN engagement that began 15 years ago and saw tens of thousands of peacekeepers serve under the UN flag alongside the Sierra Leoneans to achieve a hard-won peace. More than 17,000 “blue helmets” were deployed at the height of an 11-year civil conflict to disarm rebel militias and return this West African nation to stability.

The United Nations helped the Government to combat illicit diamond mining that fuelled the conflict, and to establish control over the affected areas. With the UN’s help, Sierra Leone’s citizens voted in successive free and fair elections for the first time in their history.

UN peacekeepers disarmed more than 75,000 ex-fighters, including hundreds of child soldiers, and destroyed more than 42,000 weapons and 1.2 million rounds of ammunition. The United Nations assisted more than half a million Sierra Leonean refugees and internally displaced persons to return home and supported training for thousands of local police.

Six years ago, UNIPSIL, a civilian political mission set out to help Sierra Leone consolidate progress, addressing tensions that could have caused a relapse into conflict while strengthening institutions and promoting human rights.

“One of the most remarkable achievements of UNIPSIL is the mission’s use of soft power to avoid political tensions. In April 2009, we were seriously concerned that conflict would flare up between political parties. We brought them to the same table and supported them in drafting a roadmap,” Project Coordinator Patrick Buse, who has been with the mission since 2009. “For me, this was one of my most memorable moments with the mission.”

And there were many such landmark moments in the years leading up to the last phase of the UN operation.

Sierra Leone became the first country in Africa to establish, with UN backing, a tribunal to address the most serious international crimes that was based in the territory where the crimes were committed. And when the Freetown headquarters of the Special Court for Sierra Leone closed its doors in December 2013, it was the first of the UN and UN-backed tribunals to successfully complete its mandate.

The Special Court’s sentencing of former Liberian President Charles Taylor was the first conviction of a former Head of State since Nuremberg – sending a stern warning that even top leaders must pay for their crimes.

The accomplishments have truly been awe-inspiring, but much remains to be done on the development front. Sierra Leone sits 11th from the bottom, or 177th out of 187 countries surveyed in the latest Human Development Index (HDI), a comparative measure of life expectancy, literacy, education, standards of living, and quality of life for countries worldwide.

United Nations Secretary-General Ban Ki-moon, who was in Freetown in early March to attend a ceremony marking the mission’s closure and the transfer of responsibility to 19 UN agencies, funds and programmes, pledged that the United Nations will work together with the people of Sierra Leone to keep the country on track along the development path.

“I can confirm here officially that the United Nations will continue to stand together with the Government and people of Sierra Leone in their march toward further and more participatory democracy and sustainable development and also promoting human rights,” Mr. Ban told a press conference in Freetown.

Even as the UN gears up to deploy peacekeepers in other parts of the African continent, Sierra Leone is a hopeful example of how peacekeeping missions can exit the scene, leaving behind a solid legacy for the future.

Parliament sets up committee to pr...