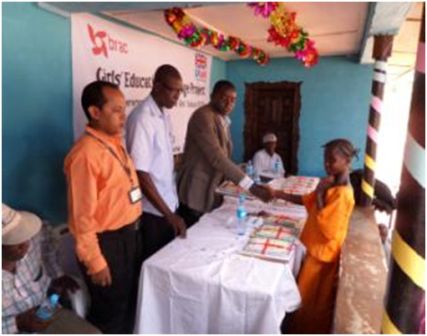 BRAC is an International Bangladeshi organization (NGO) operating in eleven countries across the globe. BRAC-SL operates throughout Sierra Leone. At old Madia village in Kambia, north-west of country, the organization constructed and commissioned a Primary School structure a few days ago.  (Photo: Deputy Kambia Education-Officer distributes learning materials to a pupil)

Old Madia village in Kambia District is one of the most deprived communities  where children and their parents find it very difficult to access such educational facilities. The commissioned Primary School is called the Old Madia Primary and was commissioned on March 17, 2014.  It was a BRAC-SL-GEC project funded by DFID.

The four hour commissioning ceremony added some joy and hope for the people of Kambia District especially the Madia Community .

Deputy Kambia District-Education Officer, Yusuf A. Kamara admonished the beneficiaries to make good use of the BRAC facilities.  He encouraged parents to send their children to school timely and on daily basis. He went further to school the gathering on the importance and essence of education in this modern day.

Section Chief-Gibril Kamara  could not reserve his gratitude and commendations for BRAC. He described the venture as timely and very much meaningful to the community, more so, when he acknowledged the complete lack of the necessity in that part of the district.

But it is evident that BRAC is entrenched and focused on multidimensional projects on Micro-Finance schemes, Agriculture, Poultry/Livestock, Adolescent Development Program (ELA), Legal and Complaint Programs, Paralegal, Health and Education, among few.

Atiqur Rohman has been BRAC Area Manager for Kambia District. Over the years, meaningful projects have successfully and positively impacted on the people in that part of the country, the happy residents have testified.  And in a bid to promote the education sector in Sierra Leone, it is on record that BRAC-SL  has been providing a series of training for about 1,200 Primary/Secondary School Teachers across the country on English, Mathematics and Social Sciences in “government and government assisted schools”, indiscriminately.

It also caters for the  “girl-child” Mentoring Trainings, and they have  been on course for 2014/16. It provides  for at least 7,500 beneficiaries across Sierra Leone. But by way of boosting the business sector, BRAC has been constantly renting guest-houses for special BRAC trainings, countrywide. It is one of the few NGOs that strictly match with acute government policies and principles for project implementations in Sierra Leone

Victor Kallie Kamara was one time Chief Administrator for Kambia District Council. Quite recently, he was transferred to Kono and now  the Makeni City Council.

Victor Kallie said that with a Mayor whose determination gears towards uncompromised development, he believes he will fit the gap. “I believe in teamwork  and not being at each others’ throat”, the Chief Administrator noted.

In less than a week of his transfer, Victor has started identifying what he referred to as the low compliance rate of people paying their property/business licenses. He was also fast to visit some schools within the city of Makeni.

“I have noted that sitting accommodation and school structure maintenance is a challenge. Makeni being a Municipality, such responsibilities must not be shifted to missions, rather than being a direct responsibility of the Council,” Kallie admonished.  He said  “I believe I have great task to meet”.