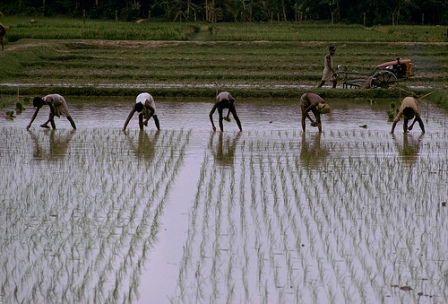 Sierra Leoneans love to eat rice. For them, rice is the food to live on. “It doesn’t matter what other food they eat, they must eat rice at least once a day before they can say they have eaten at all,” explains Umaru Fofana, editor of Politico, a Sierra Leonean newspaper. But now Joseph Sam Sesay, the minister in charge of agriculture, forestry and food security, wants his compatriots to loosen their relationship with rice. Over-reliance on it, Mr. Sesay believes, could affect the country’s food security goal. “I encourage our people to change their habit and alternate rice with other crops grown in the country.” By “other crops,” the minister is referring to yams, cassava and sweet potatoes.  Rice fields. Thomas Sennett / World Bank

Mr. Sesay hopes that if people eat other food varieties, locally produced rice, of which there was about 693,000 tonnes in 2013, will be more than enough and there will be no need to import food. But Sierra Leoneans have simply shrugged off the minister’s advice, as if to say, “Thanks, but no thanks.”

Changing Sierra Leoneans’ eating habits is a tough sell, but the minister draws inspiration from Nigeria and Ghana, two sister West African countries whose citizens used to consume plenty of rice but are now also eating a lot of cassava, yams, beans, potatoes and other crops. In Sierra Leone rice is also a high-voltage political issue. Voters usually favour candidates who promise to make rice easily available and affordable.

Looking at other crops

In a report for the Food and Agricultural Organization (FAO), Sierra Leonean researcher Ibrahim J. Sannoh notes that while agriculture accounts for close to half of Sierra Leone’s GDP, local rice production alone contributes 75% of agricultural GDP. Sierra Leone’s “annual per capital consumption of rice is amongst the highest in sub-Saharan Africa,” states Mr. Sannoh.

Analysts believe that the minister is right to push for other crops. “Rice is Sierra Leone’s staple food but the country’s agricultural sector is largely subsistence and does not produce sufficient rice for domestic consumption, not to talk of export,” reports NewsWatch Sierra Leone, an online publication. In 2008 the government created the Agenda for Change programme, setting itself a goal of food self-sufficiency and possible surplus for export.

Five years later, depending on who is doing the evaluation, progress is a glass either half empty or half full. NewsWatch grumbles that “more than 60% of rice consumed in the country is still imported from abroad.” The World Food Programme (WFP), the UN organ that fights hunger, reported last year that households in Sierra Leone spend “on average 63% of their total expenditure on food” while about 52% of the population borrows money to buy food.

Sierra Leone’s broader poverty picture is not pretty either. Nearly 53% of the population lives on less than $1.25 a day, according to the World Bank. The UNDP Human Development Index, which evaluates countries based on life expectancy, education and income, ranked Sierra Leone 177 out of 187 countries in 2013. UNICEF reported last year that about 34% of the population is physically stunted due to malnutrition. The situation is particularly dire in Moyamba, Pujehun and Kenema districts—some of Sierra Leone’s bigger regions.

Inadequate infrastructure is a major impediment in the march towards food security. Erratic electricity supply and bad roads affect farming, reports WFP. “Consumers too are negatively affected by poor infrastructure and floods during the rainy season.”

Nevertheless, Minister Sesay boasted last year that rice production has increased by 35%, and cassava and sweet potato production by 34%, while palm oil, coffee and cocoa have also seen an upswing. Andrew Keili, a development expert who regularly consults for the World Bank, supports efforts to diversify agriculture. In a blog post, Mr. Keili agreed that eating foods other than rice will help food security efforts. However, he stressed that “some of these alternative foodstuffs may be affordable for fairly affluent urban dwellers to buy…but may be beyond the reach of poor people.” Citing a WFP report, he argued that with inflation at about 13%, poverty is the main cause of food insecurity.

The silver lining is the ongoing decrease in the amount the government is spending annually on food importation, which dropped from $32 million to $15 million between 2007 and 2013. World Bank data appear to support the minister’s assertion that progress is being made. For example, between 2007 and 2013, rice production increased steadily from 370,000 tonnes to 693,000 tonnes. Despite such increases, Sierra Leone’s agricultural sector is growing at 5.3%—shy of the 6% target set by the African Union in 2003 when it adopted the Comprehensive African Agricultural Development Programme (CAADP).

On signing the CAADP Compact in September 2009 to demonstrate his commitment to agriculture, President Ernest Koroma declared, “This is an important historical moment not only for Sierra Leone, but for Africa as a whole. We regard CAADP as being pivotal to our poverty and hunger eradication efforts.”

Yet Ibrahim Mayaki, CEO of the New Partnership for Africa’s Development (NEPAD), did not list Sierra Leone among the six countries that have met or surpassed the recommended 10% budget allocation for agriculture. Those countries are Burkina Faso, Ethiopia, Malawi, Mali, Niger and Senegal. Rather, Sierra Leone is in the category of countries whose agricultural budgets are oscillating between 5% and close to 9% of the national budget.

Mr. Mayaki’s report is not necessarily a criticism of Sierra Leonean government’s efforts in agriculture; indeed, the country’s current agricultural status is a far cry from what it was a decade or so ago. For most of the 1990s Sierra Leone was best known for its diamonds—and the devastating civil war that the scramble for those precious gems helped to sustain. During that period, the agricultural sector used to grow at less than 2%.

By 2001, when the war was ending, the country could produce only 186,000 tonnes of rice per year. Fast-forward to today, when the West African nation is tapping a different kind of wealth: the crops that can grow on its fertile land. A country that could barely feed its citizens not too long ago is now aspiring to self-sufficiency in food production.

Take Marie Kargbo, for instance, who cultivates rice on a six-hectare farm in Kambia district in northwestern Sierra Leone. She’s been having bountiful harvests as a result of increased government support. “Before now, life for women farmers was very difficult,” she told a reporter for the Inter Press Service news agency. “But now rice production has been fruitful, as we have been receiving supply from the government, ranging from seed rice [to] power tillers, fertilizers and pesticides.”

The government reckons it can make agriculture even more worthwhile for farmers like Ms. Kargbo. To start with, it hopes to increase the agricultural budget to more than 10% of the national budget. This will translate to more farm implements, tractors, fertilizers and other materials that can help rural farmers. Already the government has phased the previous Agenda into another dubbed the Agenda for Prosperity, to be implemented between 2013 and 2018 (President Koroma’s second term). The new Agenda is expected to lay a foundation that will make the country middle-income within 22 years.

President Koroma envisions commercial agriculture, value addition and agro-processing. He sounded a clarion call last December: “For far too long we have been saddled with weak linkages between primary producers and consumers, ineffective land tenure systems, suboptimal electricity production, weak telecommunication networks.” He pledged to overhaul the educational system to create “mind-sets and skills for innovative application of science and technology” and hence attract investors to the agricultural sector.

A combination of factors could bring the dream of self-sufficiency in food production within reach. For example, rainfall, while erratic, has generally been sufficient. Mr. Sannoh’s report lists other factors: Sierra Leone covers 72,300 sq. km, of which 5.4 million hectares (74%) could potentially be cultivated. The uplands represent 80% of arable land suitable for different food and cash crops. Even the lowlands, with higher fertility, can have high crop yields.

The president himself talked about land tenure reforms and the application of science and technology in agriculture. Ideas are pouring forth in torrents, and awareness of agriculture’s role in socioeconomic development is increasing. It’s as though the scales have suddenly fallen off the eyes and Sierra Leoneans are beginning to believe that while the country’s underbelly may store huge deposits of high-value minerals such as gold, diamonds, rutile and bauxite, the real “diamond” is its vast, fertile and uncultivated lands.

By Kingsley Ighobor and Ernest Harsch, Courtesy of Africa Renewal 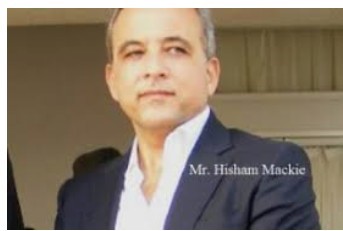 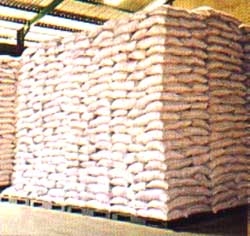