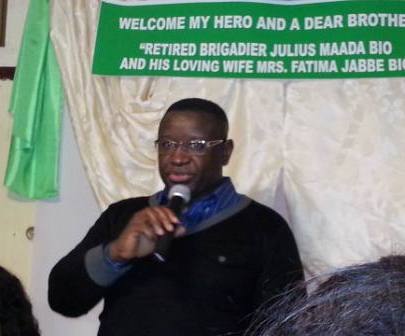 Former Head of State, Rtd. Brig. Julius Maada Bio (in photo) told Sierra Leoneans in London that what he did as Head of State in 1996 to ensure a smooth democratic transition from military rule to multi-party democracy and his efforts to start the peace talks with Foday Sankoh were part of his responsibilities rather doing favours to Sierra Leoneans.

He was speaking at a Special Event hosted on Saturday, 22nd February 2014, organised by family members, friends and well-wishers in London, in honour of his personal contributions as Head of State to Sierra Leone’s democratic transition from military rule to multi-party democracy

In his address, the former Head of State with his usual humility started by expressing appreciation to members of the Sierra Leone Community in UK who attended the occasion. He told his audience that on many occasions throughout the campaigns in the 2012 elections, many people would always narrate the role he played as Head of State in 1996 to ensure that our country return to democracy and his efforts to reach out to Foday Sankoh.

Rtd. Brig. Julius Maada Bio also emphasised that during his term as Head of State, there were many friends and individuals who benefitted from the system who would tell him that he should not handover power. But he said as a Leader, sometimes you have to make a decision between two competing interests: on the one hand, you may have the interests of your family, friends and close individuals whilst on the other hand there is the interest of the majority of people. “At that tender age and with all the pressure from friends and close individuals, I put the interest of the majority of the people above my friends, family, individuals and my personal interests” he added.

Furthermore, he said the reason why people write or say so many things about him is because in his three months as Head of State, he left a track record of peaceful democratic transition and initiating a contact with RUF’s Foday Sankoh. The former Head of state also said that for the few people, who always write to smear him, they have had 17 years to prove whatever allegations or claims but they have failed to do so.

On the issue of his efforts to reach out to Foday Sankoh, an emotional Rtd. Brig. Julius Maada Bio told the audience that because of his initial efforts during the peace negotiation most of his family members were wiped out in his village in Tihun by RUF. But he stressed “Despite such a personal loss I decided to talk to Foday Sankoh and embraced him just to make sure that we should bring to an end the killings and victimisation of many other Sierra Leoneans”

However, despite the former Head of State made it clear it was not a platform for political campaign, he could not let go the temptation of talking about the present state of the country. As an astute politician he knows despite his popularity, anytime the opportunity arises to speak to All People’s Congress (APC) members, he will not let go the opportunity. So to the APC members present in the gathering he said “I am happy our colleagues from the APC are here. The development of a country requires every tribe, region and individual. The APC and Sierra Leone People’s Party (SLPP)P are different parties with two competing visions. The APC may have their vision on what is best for the country and SLPP has its own vision on what is best for our country. But as a people we have to stop this too much addiction to party colours which constrains people from speaking the truth. We should start addressing national issues by putting the interest of our country above our personal and party interest. This means that if President Koroma’s government does anything that is good for the country when the SLPP comes to power, if I am elected as the SLPP Flagbearer, I will build on it. Also as an Opposition Party, we in the SLPP should also be able to hold the APC government to account for any failures, poor performance or under-performance. We must all make our contributions to national development irrespective of party allegiances, tribes and regions.”

No doubt, that message was pleasing to the ears of many of the APC members who led the rapturous applause with all smiles.

There were also many responses from the audience as speaker after speaker showered praises on Rtd. Brig Julius Maada Bio for his courage and strong leadership whilst serving as Head of State in one of the most defining moments during our history.

For her part, the Vice Chairlady of Union of Sierra Leoneans, UK/Ireland, Madam Marie Kabia said that she was very pleased to see the Rtd. Brig. Julius Maada Bio in person for the first time as many of the times she has only heard about his name and the positive things he did for the country as Head of State.  She said Sierra Leone needs a leader who loves his country and care for the people and that the Rtd. Brig. Julius Maada Bio has demonstrated that as Head of State.

In his contribution, Alpha Sankoh, Auditor of Union of Sierra Leoneans, UK/Ireland and an APC member said Sierra Leon is facing lot of challenges and no doubt about it people are not happy because of the present suffering. He said about the Rtd. Brig. Julius Maada Bio, “It takes any Patriot who loves his country to decide what is best for the country. Therefore, whoever puts the interest of the country above his personal interest that is the person we should look up to and Maada Bio falls in that category.” He ended his short remarks by advising the Rtd. Brig. Julius Maada Bio that what he needs to do now is to carry on with the slogan: One Country, One People. Understandably, his contributions for the night received a very loud applause.

Fatima Jabbe Maada Bio, wife of the Rtd. Brig. Julius Maada Bio, also took the opportunity during the night to speak very passionately about her husband whom she referred to as a very loving, caring and compassionate husband.

On behalf of the Bio Family, Princess Bio, younger sister of Rtd. Brig. Julius Maada Bio thanked all the guests for honouring his brother in appreciation of the things he did as Head of State which always make them proud as a family. She said whilst the occasion was not a political campaign gathering but she believed the occasion has given people a chance to ask questions, narrate their stories and most importantly listened to her brother.

It could also be recalled that according to Senate Congressional Record, (Pages S3958 – S3959) dated April 23rd 1996, Senator James Jeffords submitted for himself and three other senators, (Mrs Kassebaum, Mr Simon and Mr Feingold) a Senate Concurrent Resolution 53 Relative to the Republic of Sierra Leone. In her contribution to the Senate Concurrent Resolution 53, Senator Nancy Landon Kassebaum said about Rtd. Brig. Julius Maada Bio “Finally, I want to commend the former military ruler of the country, Julius Maada Bio, for respecting the results of the elections. Until the last moment many questioned whether the military would actually hand over power. Of course, many military rulers – including some in West Africa – have ignored elections. But Brigadier Bio demonstrated Statesmanlike Leadership in guiding his country to Democracy and I believe history will look upon him kindly”.

Similarly, On 15th February 1996, the Security Council of the United Nations in a Press Release (SC/6178, 3632nd Meeting) read by the President, Madeleine Korbel Albright (United States) singled out Rtd. Brig. Julius Maada Bio to welcome his decisions to abide by the will of the people and his first contact with Foday Sankoh which led to the Peace Talks in Yamoussoukro, Ivory Coast.