African-Americans reconnecting with their homeland … 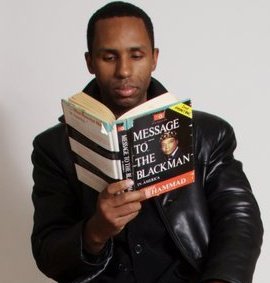 African-Americans reconnecting with their homeland …

Alex Hailey’s “ROOTS” was an eye opener on African-Americans’ desire to discover their origin.  Sierra Leoneans are also very familiar with the history of the Gollahs of South Carolina, whose strong connections with Sierra Leone is quite impressive.  Most recently, we saw Hollywood actor Isaiah Washington’s return home to Sierra Leone after discovering he is of Sierra Leonean decent.  This brings us to brother Elijah Shabazz  (in photo) who, after having a chance encounter with a Guinean Immigrant in New York, who tried to force him to speak Fullah mistaking him with another Fullah man, felt a spiritual awakening that tells him that he should know that language and that he belongs to that tribe.  He sets on a journey to Futa Jallon to discover his roots and learn his new found identity. Read on…..

Peeral: Good afternoon Elijah, and thank you for granting us this interview. Before going further, would you please tell us something about you.

Elijah Shabazz: I am a descendant of the Fulbe (Fulani) in North America who were brought here during the transatlantic slave trade.  When I discovered my roots I was inspired to do extensive research of Fulbhe history and culture.  Among those findings is what we are discussing today.

Peeral: What about the “Texas Longhorn” and the Fulani N’dama you posted on Facebook?

Elijah Shabazz: The “Fulani N’Dama” is one of the only two breeds of Long Horn Cattle found on the African Continent.  It’s Origin is here in Fuuta Jaloo (Futa Jallon).

Most cattle found throughout the world fall victim to a disease called trypansoma – which is carried by the Tse-Tse Fly.  The “Fulani N’Dama” was bred by the Fulbe as one of the few trypanotolerant cattle on Earth.

These facts concerning this Fulbe Special Breed of Cattle were taken into consideration when they brought the “Cowboys” (Fulani Cattle herders) to America.  They not only brought us they brought our Cattle.

Peeral: You have been to Fuuta Jaloo, discovered many important aspects about Fulbe, could you nevertheless quote from others on this?

Elijah Shabazz: According to Joseph E. Holloway a historian of African-American Culture: “When the Fulani (or Fula) people from Senegambia, along with longhorn cattle, were imported to South Carolina in 1731, colonial herds increased from 500 to 6,784 some 30 years later. These Fulas were expert cattlemen and were responsible for introducing African husbandry patterns of open grazing now practiced throughout the American cattle industry. ”

This phenomenon has spurred what is now known in America as “Cowboy” culture.

Joseph E. Holloway further points out: “Originally a cowboy was an African who worked with cattle, just as a houseboy worked in “de big House.” Open grazing made practical use of an abundance of land and a limited labor force.  Many details of cowboy life, work, and even material culture can be traced to the Fulani, America’s first cowboys.”

And, a recent 2013 joint study conducted by the Universities of Texas, Missouri and Colombia has found that the MtDNA of the “Texas Longhorn” is exactly the same of this special breed of N’dama cattle. Texas is known to be the home of “Cowboy” culture in America.

It’s a culture stolen from the Fulbe of West Africa. I went to Fuuta Jaloo, there I was back home among my kinsmen  and our N’Dama Cattle.

Peeral: How have you been doing with your Fulfulde since?

Elijah Shabazz: Fine, I have been doing my best reading and speaking Fulfulde every day.

Peeral: Again we thank you very much, may the Almighty continue to bless you.

Elijah Shabazz: Thank you too. And thank you Allah the Beneficent, The Merciful, The Restorer.

This interview was conducted and is courtesy of  www.peeral.com an online newspaper published in Holland in the Fullah language, by Peeral Media Network.