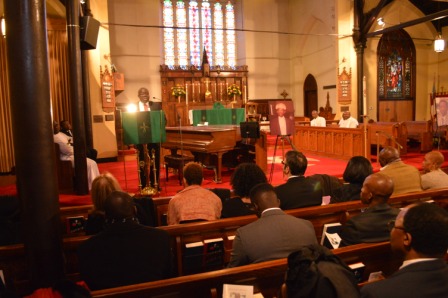 The late revered statesman died on January 18th 2014, in Washington DC USA after a short illness.

Speaking during a well-attended memorial service Saturday February 8th at the St Luke’s Episcopal church on 1514 15th Street NW Washington DC, Ambassador Stevens described Hon. Serry Kamal as a “distinguished gentleman, whose passion and devotion to the legal profession and the All Peoples Congress (APC) party were not only unshakable, but were admirable also.

“Serry Kamal saw it became important for all who have a responsibility to fight for a cause-to recognizes that a cause is not advanced if we can’t also try to achieve compromise. His shared love for Sierra Leone transcends Party Politics.” Said Ambassador Stevens. Adding, “Serry Kamal was a die-hard and lifelong member of the APC.

Ambassador Bockari Stevens recalled 1992, soon after the National Provisional Ruling Council (NPRC) overthrew the APC government of ex-President Joseph Saidu Momoh, and said “many people were afraid to associate themselves with the APC, because of the naked aggression meted out to former government officials and APC party affiliates: but Serry was there unruffled.

He not only represented APC party members at the different Commissions of Inquiry (Beccles Davies, Lynton Nylander and Laura Marcus Jones) set up by the NPRC junta to investigate APC party members, but also represented them in a court of law. Ambassador Stevens said Serry Kamal stood firm with few others to ensure that the APC never dies. While others were demonizing the APC, Serry Kamal was there to defend it.

Ambassador Stevens prayed for the good Lord to console the bereaved family and for the soul of the faithful departed to rest in perfect peace.

Mr. Abubakarr Kalokoh (Esq) described the late legal luminary as a “mentor” with whom he worked under challenging circumstances.”

Mr. Kalokoh said the late luminary was a fearless lawyer who facilitated his early appearances in Commissions of Inquiry, Treason Trials and Court Martials on different occasion.

APC North America chapter Chairman Mr. Ibrahim Sanpha Kamara described comrade Abdul Franklyn Serry Kamal as a life-long member of the APC, who was always proud to defend his party. He described the late legal luminary as a disciplinarian, with a high sense of humor.

Mr. Joseph Serry Kamal, the brother of the deceased, spoke of his brother’s love for his family and dedication to his work.  He also spoke about Mr. Abdul Serry Kamal’s love for the APC and Sierra Leone.

Dr. Robert Thomas spoke of their boyhood days at the Sierra Leone Grammar School, where he not only excelled in his education pursuit, but was also identified as a very good cricketer.

The memorial ceremony which was officiated by two distinguished clergy (The Rev. Canon Dr. William B. Lewis  and The Rev. Gloria Cline – Smythe), saw two very large sized photos of the Late Hon. Abdul Franklyn Serry Kamal displayed on an easel, bearing the focal point of the ceremony.

During the memorial service, some people openly displayed courage, while others soaring rhetoric were overcame by emotions

In his vote of thanks, the very Reverend Dr. William B. Lewis thanked all in attendance and said, “unlike so many of you, I did not have the privilege of knowing Abdul Franklyn Serry Kamal personally. But in listening to the wonderful memories that have been shared, I get a sense of this man and I recognize his humility, dedication to his work as a lawyer and his forthrightness as a APC party die-hard.

May his soul rest in peace. Amen.