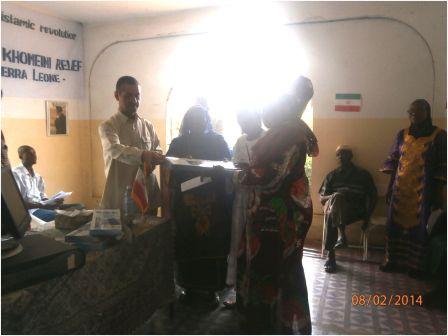 The occasion attracted not only graduates but also people from all walks of life including Imams, parents, Islamic scholars and many other personalities from the public.

The programme started with recitation of the Holy Quran done by Sheikh Abdulai Habib Turay and followed by the opening prayer delivered by the Freetown Central Mosque Imam, Sheikh Ahmed Tejan Sillah who maintained that the Foundation was found worldwide, and that the Sierra Leone branch was having its sixth graduation ceremony on that day.

He emphasized that Iran is propagating the necessity of education as a force that will change the world and make it a better place to live.

Sheikh Ahmed Tejan Sillah further described learning as a light that increases human ideas and teaches the secrets of success in this world and in the hereafter.

Given an overview of Foundation, the Training Manager, Sierra Leone Branch, Mr. Alieu Badfara Sesay disclosed that two hundred students were going to graduate. He pointed out that the Foundation does not only depend on computer training but they also train interested Sierra Leoneans in tailoring, gara tie dying, hair dressing and soap making among others.

He further disclosed that they have extended their activities to some other parts of the country, like Rotifunk in Lungi and Port Loko town.

He stated that, Imam Khomeini Relief Foundation came at the right time as Sierra Leoneans needed the institution as a matter of urgency.

He explained that the Foundation has no barrier as it encourages the participation of not only Muslims and Christians but also young and ageable people. He emphasized that the idea of the Foundation is not only based on Islam because the Supreme Leader Imam Khomeini was not discriminating anybody on the bases of his or her religion.

He attested that most of the trainees from the IKRF were employed by the National Electoral Commission (NEC) in the past 2012 General Elections and others are employed in both the public and private sectors.

He said he was very grateful to brain behind the whole process, the Iranian Cultural Consul, Mr. Mohamed Reza Ghezel Sofla for helping thousands of Sierra Leoneans over the past six years to develop their talents through the training programme.

Mr. Turay handed over five computers to IKRF Port Loko branch for a start up programme. He disclosed that they intend to take the programme into the East and South of the country.

Delivering the keynote address, the Cultural Consul of the Islamic Republic of Iran, Mr. Mohamed Reza Ghezel Sofla, described the graduation ceremony as a harvest day for the graduates as they are going to receive their certificate after working relentlessly for a whole year.

He pointed out that the aim of the Foundation is to build up young generation of Sierra Leoneans to be useful and fruitful people who would do good things for the benefit of the country.

He re-echoed that the focus of the Foundation is to help the deprived and oppressed people and not for the purpose of making profit.

In conclusion, he said IKRF was formed March 5th 1979, that is twenty two days after the successful Islamic Revolution in Iran.

‘Freetown is no longer the darkest...