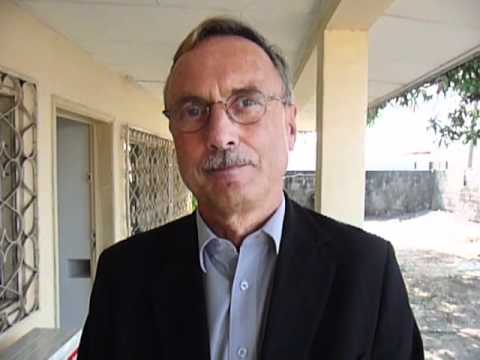 Freetown, Jan. 28 (SLENA) – The German ambassador to Sierra Leone, Christian Rumplcker (in photo) on Monday this week paid a one day working visit to the Speaker of Parliament, Hon. S B B Dumbuya as part of strengthening the bilateral relations that already exists between the two countries.

Speaking to the speaker at his office in parliament, the German ambassador said his government intend to work with the Sierra Leone parliament to help boost the country’s governance system and strengthen economic ties.

The ambassador called for the establishment of a Sierra Leone-Germany friendships association whereby the two countries can benefit from other each other, adding that the German government hopes to support the government in its agenda for prosperity.

He said he looks forward to a visit by the Speaker to Germany to establish the friendship.

Responding, the Speaker, Hon. Dumbuya expressed profound appreciation of the German envoy’s visit, stressing that the government of Sierra Leone will continue to work with the Germany people in moving forward the development aspirations of the country.

The Speaker appealed to the envoy for capacity building more particularly in the area of parliamentary oversight activities, expressing his support  for the establishment of a friendship society between the two countries  so that both countries will understand the operations of two parliaments.

The majority Leader of Parliament, Hon. Ibrahim Bundu welcomed the visit of the ambassador and appealed for subsequent visits in order to strengthen the bilateral relationship between the two countries.