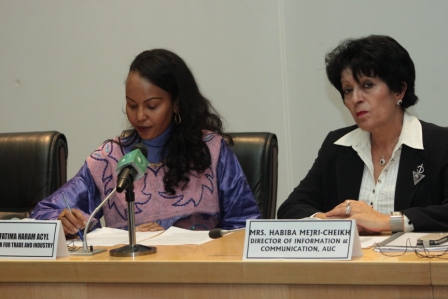 Commissioner Acyl explained that dependency on commodity and unprocessed raw materials will not allow Africa to achieve its vision of an integrated, people centered, prosperous Africa. She underlined that, to realize this vision as part of Agenda 2063, there is a need for economic transformation of African countries and wealth creation for Africans. The Commissioner further explained that the road to realizing such objectives begins with implementing existing frameworks such as PIDA (Program for Infrastructure Development in Africa), CADDP (Comprehensive Africa Agriculture Development Program), BIAT/CFTA (Continental Free Trade Area), AMV (African Mining Vision) and AIDA (Accelerated Industrial Development for Africa).

The Commissioner for Trade and Industry reported that, with regards to trade and industry, in particular with the BIAT/CFTA, AMV and AIDA frameworks, the Commission has taken initiatives to enhance the impact in these areas. She added that, in terms of the CFTA the Commission is in the process of setting up an African Trade Observatory to gather and analyze trade and industry statistics, a CFTA secretariat to work with member states and regional economic communities and prepare for the CFTA negotiations in 2015, and an African Business Council to integrate private sector stake holders within the decision making process of the commission.

The Commissioner also advised the need to focus on investing in African people and introducing initiatives to take advantage of Africa’s increasing population. According to Commissioner Acyl, the suggestion comes in light of the expectation that 25 percent of the world youth under 30 years will be in Sub-Saharan Africa 10 years from now and considering the projection that Africa’s population will increase from 15 percent of the world population in 2013 to 23 percent by 2050. 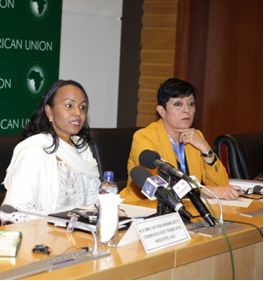 AU Commissioner for Trade and Industry u...