‘My mission is to unite the divided football family’ – Mohamed Sasso

‘My mission is to unite the divided football family’ – Mohamed Sasso

Ex-East End Lions and Al-Tadamansour Right Back, Mr. Mohamed Sasso, who is currently in the country from the United States of America, has revealed to this paper that his mission here is to settle disputes amongst old football players who are at each others’ throat before, during and after the Sierra Leone Football Association (SLFA) elections late last year.

“It is very sad and frustrating to see footballers who in the past played together in different clubs and the national team, Leone Stars, now divided into various camps,” he opined, pointing that “this state of affairs is not good for the game or our image as we must be seen as role models who must set good examples.”

He observed that it was very sad that men who had sat and played football together, ate, and drank together, should become enemies.

He said he was happy to report to the people of this country that he has been able to resolve those differences and the football legends are one big family once more.

Mohamed Sasso played for East End Lions and was known for his deadly crosses from the wings and for his ferocious attackers and good vision within the opponents’ zone.

On his arrival last month he donated four sets of jerseys to the veteran clubs of Wilberforce, Brooksfields, East-End Lions, and Friends together with two footballs each as a gesture to unite all the old football legends.

‘Nurses should change their attitu... 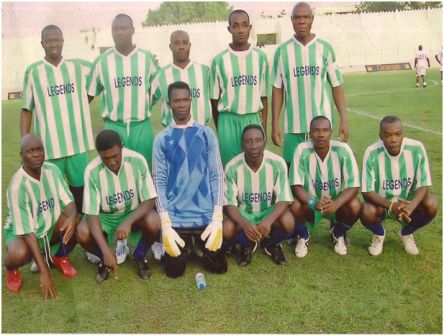