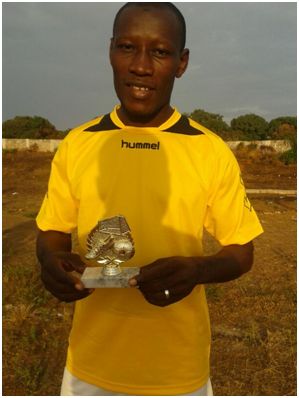 In a competition that he played for six matches out of nine Augustine Lamboi scored eight goals to bag the award of the highest goal scorer of the league.

In his statement he was shocked and surprised to be the highest goal scorer amongst young boys whom he thought would have worked very hard to win the award, but on the other hand he appreciated the effort of his colleagues for making it possible for him to win the award which he dedicated to the veterans of Lungi for the tremendous effort they gave to him during the competition.

He went further to state that he has found a new spirit in himself to continue playing football and he encouraged the young ones to improve on their goal scoring skills if they want to be good strikers, as he started playing football as a defender but his effort has earned him such an illustrious award.