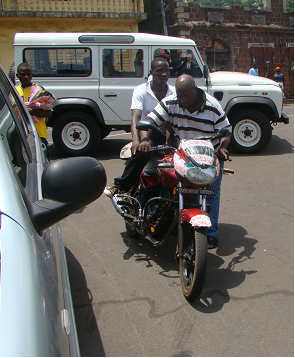 Bo, Jan. 18 (SLENA) – The Assistant Inspector General of Police, South, has discussed with stakeholders the serious challenges posed by the membership of motor bike riders, even though he said they are very helpful in the area of transportation.

Speaking at a stake holders meeting earlier in the week at his regional head office in Bo, AIG David Sesay said bike riders were in the constant habit of holding the streets to ransom in a lawless manner each time action was taking against one of their members.

He cited incidents involving biker riders running into vehicles and dying on the spot due to reckless riding.

Speaking on security in the region, AIG Sesay described it as calm, notwithstanding the Sahn Malen land saga in the Pujehun District, which he referred to as very challenging and needed serious attention.

According to the AIG, the Government in collaboration with other stakeholders are working frantically to find lasting solution to the trouble in that chiefdom and called on the chiefdom people to maintain peace and respect the rule of law.

He disclosed the fifty suspects have so far been arrested for unlawful gathering at Sahn Malen over the weekend. Twenty-five of this number has been released, the AIG said.

Adding his voice, the Deputy Mayor, Bo City Council, Councillor Mohamed Wurie Jalloh thanked the AIG for conveying such an important meeting and expressed his disgust over the reckless behaviour of bike riders.