New Year Resolutions for Sierra Leoneans in the Diaspora 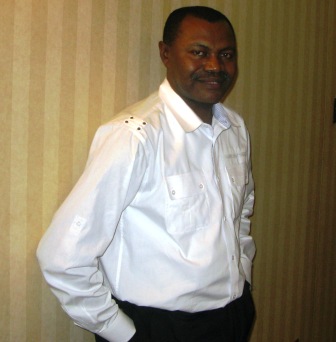 New Year Resolutions for Sierra Leoneans in the Diaspora

This article is to examine critically the role the Sierra Leonean Diaspora plays or has played in the reconstruction of our country and the challenges of being involved as an individual or an organization from a far distance.  Every year we promise to change our attitude and behavior and every year we also screw it up.  We have the obligation to develop a sense of urgency not only in our personal lives but as a community at large in the Diaspora. Our resolutions will loom largest in our plans to change our attitudes.  (Photo: Sanpha Sesay, author)

First of all, I am referring to the great speech Dr. Kandeh Yumkellah delivered in Freetown club recently where he posed the question, “what have we as a people achieved in the past decade since the war ended?” In his own view, he acknowledged some major accomplishment by the past and present government such as, the establishment of NASSIT, an institution that guarantees every worker in the public sector and the private sector a pension which is a major score card of former president Ahmed Tejan Kabbah in 2002 – 2007. The prevalence of free healthcare, in an attempt to guarantee access to basic health care for all, is a score card of Ernest Koroma in 2007 – 2012.

Dr. Yumkellah, in his assessment, exhausted many of the various governments’ accomplished goals but failed to ask, “What have we as Sierra Leonean citizens done for our country since the end of the war?  I will specifically ask the Diaspora, what efforts have we done collectively or as an individual contributed to the economic development of our country since the end of the war? Perhaps, some of the accomplishments spelt out by Dr. Yumkellah could be accredited to the governments and people who decided to endure the consequence and stick around during and after the war.  What about those of us who cowardly fled the country during and just after the war?

Thousands of Sierra Leoneans fled the crisis and settled in different countries around the world with the expectation that we will integrate into societies of national symbolism; a symbol that will have an impact in the development process of our shattered country.  What have we done so far apart from grouping ourselves into political parties, tribal groups, and to larger extent regional groups in the Diaspora?  What is the impact of all those groups in our recovery process?  However, if we are successfully divided into these groups, what have we done in those entities to serve our country; for instance, the reconstruction of education system which was badly affected by over 11 years of civil war?  To be worthy of compares, take a look at what Ghanaians have done in Germany.

The Ghanaians in Germany formed an organization called Union of Ghanaian Associations in Germany (UGAG), some of its objectives are to support and co-ordinate the activities of all affiliated Ghanaian Unions and Associations at local and national levels.  The union also launched the Ghana Solidarity Fund.  Here donors can donate at least one Euro per month and the proceeds are to be used to support unfortunate Ghanaian school children, who need support because their parents cannot afford to support them at school.  Since its formation UGAG successfully negotiated with Lufthansa and other airlines to reduce fares for passengers flying to Ghana.  What about Sierra Leoneans in Germany?

In South Sudan, despite another war outbreak, the Sudanese Diaspora in the United States took the challenge of being involved by building a frame work to analyze micro-development projects in the education system.  They were recognized for that by the international communities.  What about us in the United States?  The Sierra Leone Diaspora has never got praised by any country or the United Nations for any of their remittances, investments and knowledge transfer to our country.  Individual family financial support is not enough and can lead us to nowhere as a nation.

In the United States, politicians recognize the impact of Diaspora engagement in the development of the states, but they also expect, especially people from developing countries, to integrate into necessary conditions that exist for them to be able to share their human, social, and cultural capital; as well as to foster economic growth of their countries of origins.  Some Diasporas are recognized for their engagement in the development of their countries.  For instance, Ecuador has emerged in a good case study of the interactions between Diasporas and their countries of origin.  The recent enactment of external voting rights has mirrored a novel political discourse which emphasizes the positive contribution of Ecuador Diasporas.  What have we done for our country as individuals or as a Sierra Leone community in the Diaspora? I must acknowledge the financial contributions to our families in sustaining their livelihood back home, but that is not enough to determine the cultural capital of Diasporas that is related to the globalization of ideas, knowledge, and to some extent social models of the main land of our country.

Few people in my state of residence, Texas that I can identify have actually been involved in the reconstruction as an individual.  Dr. Alusine Jalloh, an associate professor in the University of Arlington,Texas (UTA) in the USA is the best example that I can cite.  He has made a vital contribution to the reconstruction of education by establishing a Department of Social Work in the University of Sierra Leone.  Alongside Dr. Alusine is a technocrat, Mr. Reuben Ndomahina who is working tirelessly to bring all organizations in the metropolitan area of Dallas Fort Worth Texas under one umbrella to accomplish this article’s intended goal.  Mr. Ndomahina has not yet succeeded in achieving ambitious goals because it is not easy to put Humpty Dumpty back together in a situation where the community is entrenched with social and political pluralism.

In my research, Sierra Leoneans pay the highest cost of airfare to travel to Sierra Leone and the highest cost of communications to reach out to our families back home.  A reliable source stated that the Ambassador to the United Kingdom, Mr. Edward Turay made effort to fight the cause of the high cost of flying to Freetown at government level, but my source says it was put into deaf ears by government authority in Freetown.  What can we do as a Diaspora like Ghanaians in Germany did to remedy the solution of paying high cost of travel to Sierra Leone, and what can we do to challenge the high cost of telephone communication to our country?

My apology is that I could not reach out to community leaders in various cities and states across the USA.  It is also not easy to reach reliable persons that I can interview out of the USA to ascertain my report.

My New Year resolutions to the Diaspora is simple.  We must be committed on the surge in willpower to take on new challenges as follows:

Building a model of collective contribution: By serving our country while in the Diaspora, we need to come together under one umbrella and establish some kind of nationalism to share common culture and develop an ideological line to contribute to our country.  Only when we are united in the various cities, states, and countries where we live can we stand to influence changes in our country.  Like Ghanaians in Germany, let us form unions which have greater chance to influence economic world power to us on our compelling issues

Building a patriotic heart: Regardless of where you stand on issues, the political party you belong to, and the tribe you belong to, we need to have our country in the back of our mind. Coming together to form a national union is part of patriotic heart I am talking about.  Whatever we do or any division we intend to make, we have to be aware that patriotism is the precondition of moral and national functioning.  Patriotism is a central moral virtue that ought to be cultivated by Sierra Leoneans wherever you are by having a great concern about your country.  Many people do not understand what patriotism is.  In his philosophical study of patriotism, Stephen Nathanson gives a more satisfactory dentition which involves, in addition to love or special affection for one’s country, also a sense of personal identiﬁcation with the country, special concern for its well-being, and willingness to sacriﬁce in order to promote the country’s good. What is good for us now is to strengthen our communities into a unified national symbol. Let us celebrate Independence together in April, a unique date of coming together, and show our country’s values to other nationals.  Think about something else to add to this article.

PART TWO: How Did We Miss It?

New Year Message to the Nation By...

17th Ordinary Session of the Summit of t...