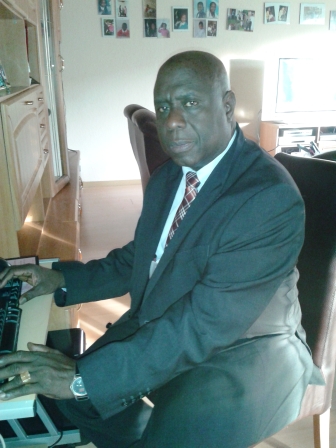 As a highly eventual year of our party draws to a close, allow me to share a few reflections with you for the past and the coming year. Towards the end of  2012,we saw political power in Sierra Leone  knocking on the door of the All peoples Congress (APC) again. In the month of November 2012, the people of  Sierra Leone provided the key to and opened the door to political power, having seen how determined our President was to effect positive changes in our country. In the elections that followed we threw the opposition into confusion that even the birds at the cotton tree did not cure their predicament. Comrades, the greatest challenge facing us is the multi-party elections of 2017. Everyone of us in the party has  a part to play. You don’t have to be a parliamentarian, or a minister. We in the Diaspora have to relentlessly continue to maintain good contact with our MPs, our relatives, and friends in our constituencies. We need to maintain the material, financial and other support we have been rendering to these people and groups.

Today I say to you that the challenges we face are real. They are serious and they are many. In the face of impossible odds people who love their country can change it. Late President JF Kennedy once said “think not what your country can do for you but what you can do for your country”. We saw a concluded selection to our branch. It is rather disheartening to have read from newspapers that sanity was brought to the APC Germany branch. We accepted the philosophy of selection for the love of the party, but we were not insane.  Nonetheless, let  us summon a new spirit of patriotism and resist the temptation of division to build up a strong partnership.

To the newly selected Chairman, I congratulate him for his hard fought campaign. He fought harder and longer for the party we all love even to the extent of applying Leninism or Marxist theories.  He endured sacrifices that most of us cannot begin to imagine. I congratulate him for what he has achieved, and I look forward to working with him, and to strengthen the branch. I called upon him and want him to understand the enormity of the task that lies ahead of him.  Hence it is said  “uneasy lies the head that wears the crown”.

I called on all Sierra Leoneans regardless of their political belonging to think twice and give their support to the APC. It could be a step to success if they start to appreciate the good work of the party. Sometimes, the efforts and the contributions we are putting in to make Sierra Leone a better place  for all may not be appreciated at the moment .  Join a party that is for every one. The All People’s Congress.

I will not end up my new year`s message if  I fail to mention my greatest admiration and courage for our Ambassador H.E. Jongopie S. Stevens and his entire staff at the Embassy. I commend him and his staff  for the greatest  unity  he has brought to the Sierra Leone Community in Germany.

May the peace and blessings of the New Year be yours, may it be filled  with happiness. Wishing you and your love ones  peace, health, happiness  and prosperity.

Our Deepest Sympathy to Boat Victi...

“Sierra Leone, I will see you soon...