UNIMAK takes education to another level 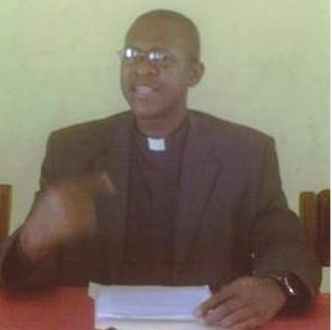 UNIMAK takes education to another level

The University of Makeni (UNIMAK) was established as an institution in 2005 by Bishop Emeritus George Biguzzi and Reverend Father Professor Joe Turay.  It was established as an institution that can provide the academic platform to enable Sierra Leoneans reflect on the reality of their nation, especially on the civil war, to study the causes and effects of that war and to provide the framework for social transformation from the ruins of the war torn society. UNIMAK based it services on three arms: teaching, research and community service.   (Photo: Reverend Father Dr. Leonard Bangura… Director of Academic Affairs)

Chernor M.B. Jalloh is a Barrister and Solicitor of UNIMAK and Lecturer at the Law faculty. He informed this press the University has produced two students that have been successfully enrolled in to the Law School. They are Ibrahim Samba and Lahai Kamara. “We train our graduates to contribute meaningfully to national development,” he said, and added that they consider law as a very important course, which is why they are providing those interested with the opportunity to gain sound education and end up becoming professionals.

The University currently have over one thousand students with 96 professional Lecturers. As the second University having a Law Faculty, UNIMAK has the lowest fee of six million Leones, compared to Fourah Bay College, which has it own at nine million Leones.

“We have got a lesser fee for the past two years in the country,” says Reverend Father Dr. Leonard Bangura, Director of Academic Affairs. He revealed that the academic scheme of the University is outlined in their seven faculties, including: religious studies, philosophy and humanities, business studies, development studies, human resource management, education, mass communications and information technology. “These faculties and departments offer Bachelor’s Degree to students who fulfil the entry requirements (5 WASSCE credits including English Language) and the departmental grade points agreed at the university senate. UNIMAK, he said also offers a Master’s Degree in Sustainable Development; and added that the entry requirement for this is Division 1 or Division II Degree in any discipline of study. “Our programmes of study are not only tailored to or inspired by emerging needs or job opportunities, but they are also aim at making our students job creators for themselves and for the greater society,” says Rev. Father Bangura, noting further that the University will be launching new programs of study for the 2014/2015 academic year. Prominent them, he said is an Executive MBA on social entrepreneurship, a department of culture and tourism, a department of political science, a medical school to train and up-grade nurses to the level of dentists, aestheticians, and physiotherapists. By the next semester, the University will be launching a new program of study offering a diploma in Social Transformation, in Governance and Ethics, and in the Social Teachings of the Church.

“We can summarize the entire vision and goal of UNIMAK as a university that avails her students with the chance of reaching their full human potentials, offering them the possibilities of becoming better individuals trained in social consciousness to give their contributions to the building of an improved welfare society anchoring on the core values of respect for life and human dignity,” he said, and concluded by calling on all to join the university in realizing its noble vision for a better Sierra Leone.

The Director of Administration and Finance, Reverend Father Benjamin Sesay said it is a herculean task to run a private university without any subvention from government. Their main revenue stream, he said is fees from students and also rent payments from commercial building in front of the campus. “We are spending over Le250m (two hundred and fifty million Leones) on a monthly basis to keep our university going,” he told this press. Despite several challenges encountered, he said they have been able to construct computer labs, hostels, and will very soon construct one of the biggest Auditoriums in the country. “We pay our staffs on time, which is why we have not recorded any strike action since inception; and we don’t condone most of lawlessness happening in other Universities, which make us unique in discipline,” the Admin and Finance Director said.