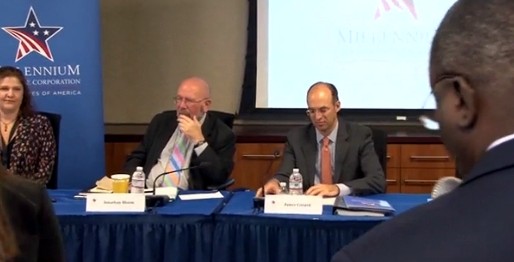 Just a day, after the Embassy of the United States of America’s Public Affairs office in Freetown, issued a press release on Sierra Leone’s ability to continue working toward Millennium Challenge Corporation (MCC) Compact Development, the Washington based MCC says that Sierra Leone must pass the control of corruption indicator before it would approve a compact with the country.  (Photo: Samuel Atere Roberts of Jacobs Engineering Group at a recent MCC Quarterly Town Hall Meeting in Washington)

Though, Sierra Leone passed half overall on its scorecard for a bid to develop a compact with 11 indicators including Inflation, Regulatory Quality, Trade Policy, Gender in the Economy, Access to Credit, Business Start-Up, Girls Primary Education, Political Rights, Civil Liberties, Freedom of Information and Rule of Law, MCC Board of Directors at its Public Town Hall Meeting in Washington on Thursday decided not to reselect Sierra Leone to continue development of its compact proposal.

Responding to an inquiry on how much influence did the Government of Sierra Leone’s past, current, and future efforts to promote transparency influenced the MCC’s decision not to reselect Sierra Leone?  And, the meaning of the “Board urged continued but limited engagement and why neighboring Liberia with 9 indicators was reselected over Sierra Leone which passed 11 indicators, an official with the MCC Press & public Affairs Office in Washington issued the following statement via email Thursday afternoon:

“The Board does look at supplemental information, including countries’ efforts to promote transparency and reduce corruption, in addition to the scorecard indicators. The Board reviewed the continued action of Sierra Leone’s anti-corruption commission, the October passage of a Freedom of Information Act and the formal announcement of intent to join the Open Government Partnership.”

“The Board urged continued but limited engagement with Sierra Leone. Sierra Leone can continue to work toward a compact proposal, but on a slower timeline, and without the same level of support from MCC expert staff.  The Board also indicated that it expects Sierra Leone to pass the Control of Corruption indicator before it would approve a compact with them.”

Sierra Leone Minister of Information and Communications who also doubles as the Government spokesperson was not available to comment on MCC’s expectations of Sierra Leone to overcome the hurdle to pass the control of corruption indicator.