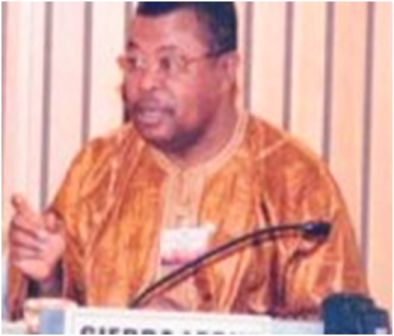 In most recent conferences and public media discussions in the country, the Minister of Agriculture, Forestry and Food Security, Dr. Joseph Sam Sesay (in photo) has said that his Ministry can better achieve massive production and commercialization of local food products in the country by closely working with the Ministry of Trade and Industry.

Pronounced as the most influential and hardworking Minister in the President Koroma led Government, Dr. Joseph Sam Sesay maintains that since he assumed office on 14th. October, 2007, his Ministry has made serious efforts to increase the production of food products like rice, cassava, sweet potato, and palm oil.

He disclosed that production of these food stuffs has increased more than double compared to past production records.

He also stated that the production of cocoa and coffee has grown more that fifty percent above the status in 2007, adding that the real agricultural growth rate has also increased from an inherited percentage of 4.17% to 5.31 %.

He also stresses that with the cooperation of stake holders in the agricultural sector, the stated statistics in the development of agriculture will increase and create more wealth for farmers.

Dr. Joseph Sam Sesay also revealed that with the cooperation of the Minister of Trade and Industry, Alhaji Usman Boie Kamara and members of his Ministry, he is confident that traders will fully cooperate in making local food products available to consumers at affordable costs, in line with the objectives of the Agenda for prosperity.

He further disclosed that members of his Ministry backed by the support of the Government of Sierra Leone and its donor partners are working assiduously to encourage everyone to fully participate in farming activities for self-reliance and food self-sufficiency. He stresses that everybody must farm in this war against poverty and starvation.

He called on traders to work closely with Alhaji Usman Boie Kamara to make sure that food products are available and affordable in the market. He thanked all stakeholders for their support in the development of agriculture in the country especially musicians who are making songs and staging concerts to draw the attention of the general public in the need to take agricultural practices more seriously.