‘Musicians and music producers must be disciplined’ Fadie Conteh 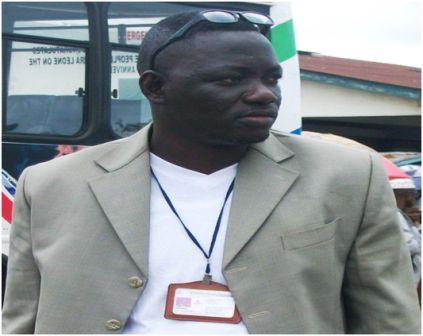 ‘Musicians and music producers must be disciplined’ Fadie Conteh

One of this country’s most successful promoters of Sierra Leonean music, has said that musicians and music producers need to have self discipline if they want the industry to grow.  (Photo: Mr. Fadie Conteh, Music Producer and Proprietor LP Studio)

Mr. Fadie Conteh who is also the Proprietor, Engineer and Producer of LP Studio situated at Soldier Street in the west of Freetown, noted that the entertainment industry is regarded as the second fastest income generating business entity of the world where people who want to get involved in investing in music should be well prepared to meet with the necessary expenses that lead to success in the business.

He lamented that lack of adequate investment has been a major problem in the music industry in Sierra Leone.

He disclosed that his leadership and efforts in the music industry in the country through his music studio has contributed in exposing local musicians like Extra ‘O,’ Sorie Kondi, Bobby, Obelix Qru among many others who are presently regarded as musical icons in the country and beyond.

He said that his major aim is to establish the LP Studio was to help promote the Sierra Leonean music culture to the outside world.

He stated that certain musicians should help develop and sustain the proper spirit of Sierra Leonean music which he observed will attract investors to do business with them.

Popularly called by musicians as Big Fad, he revealed that by the end of this month, his studio is set to expose another hopeful hit musical album in Bo town by a group known as 2M2 from the musical label, African Assassins.

He also disclosed that the Chief Executive Officer of African Assassins music label, Mr. Junice, has assured him and members of the 2M2 group that he will come to Sierra Leone next week to help in the promotion and release of the album.

He appealed to all producers, musicians and Disc Jockeys to work hard and bring glory to the country’s music industry.

Martyrdom day of Imam Hussain (AS)...

In preparation for First Division...