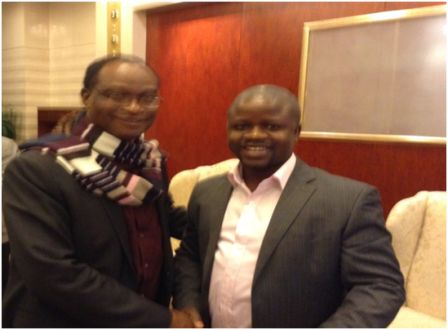 The visit by the country’s top diplomat followed an invitation extended to him by his Chinese counterpart, Wang Li.  Whilst in China, Minister Kamara had series of high level meetings with top officials of the Chinese Government, including the State Councilor in charge of Foreign Affairs, Yang Jiechi, Minister of Foreign Affairs Wang Yi and President of the EXIM Bank of China, Li Ruogu.

During his visit, Minister Kamara also had discussions with Embassy staff and with Sierra Leone’s envoy to China, His Excellency Victor Bockarie Foh. During his meeting with Ambassador Foh, the need for a Defense Attaché for the Embassy was discussed. This was in line with the rising growth of China, more so as the world’s second largest economy and now playing a leading role in Peace and Security worldwide, with particular attention to provision within the Forum on China-Africa Cooperation-FOCAC.

Another crucial issue that was discussed between the two was the need for more senior Admin staff, in the Embassy as the convention in China dictates, seniority of staff goes a long way in accreditation of staff to meetings of serious nature. This was with the view of enabling the Embassy to live up to the importance China attaches to mission representation to important meetings.

Speaking to the Press/Information Office of the Embassy on Saturday, 9th November,   envoy Foh said, 42 years of diplomatic relations are solid bridge to continue building bilateral ties but to do so, “the Mission must be upgraded to demonstrate that indeed we are looking at China as an important player in world diplomacy and international development”. Envoy Foh said he was “very much satisfied with the visit by the Minister”    and was of the view, that “outstanding issues like financing of development projects in Sierra Leone by the Chinese Government have been addressed following the visit”.

The visit has helped in strengthening already existing ties between the two countries, as indicated in the series of high profile meetings and discussions held between the top diplomat and Chinese leadership. This is particular against the backdrop of Minister Kamara’s background in the financial sector and development cooperation.

Prior to his departure for Sierra Leone, the Press/Information Office of the Sierra Leone Embassy in China caught up with the country’s top diplomat  and first asked him about the outcome of his weeklong visit:

Well I think I had a successful engagement with all the Chinese leadership, starting with the President of the China EXIM Bank. We had a long discussion on the type of instruments that they will make available for Sierra Leone to be able to finance projects under the Agenda for Prosperity, including what it takes to finance  the new airport project; the mega agriculture project ,comprising rice as well as rubber plantation. We also talked about water project and other minor agricultural projects. Basically it was about how we will be able to access both the concessional as well as the non concessional but relative preferential commercial window. After that I had discussion with the State Councillor responsible for Foreign Affairs and we more or less revisited how we could strengthen our bilateral relations. We looked at the type of bilateral relations we need to engage each other, as well as cooperation in addressing international issues. We also spent some time on the reform of the UNSC and what Africa needs to do. His advice was Africa must stay united along the Ezulwini Consensus. The last day, I visited Tianjin city which is a modern city in China. It lays a strong foundation on which Sierra Leone could copy on how to do urban planning. So I am going back to Sierra Leone with a successful visit behind me with the feeling that I got assurances from the Chinese leadership of their firm support for Sierra Leone and I am very happy.

Did your meeting with the Export-Import Bank of China (EXIM Bank.) deal with specifics on the new airport project given the significance government attaches to it?

The original project was designed along a financing package of 200 million dollars but on the intervention of Government, the wish of President Koroma is we try to do a modern airport that will stand the test of time; an airport that will be able to accommodate Sierra Leone’s potential for heavy air traffic, given Sierra Leone strategic location; that is, linking up with Latin America, Southern Africa, Europe and certainly East Africa, Central Africa and North Africa. So the cost went up to something like 300 million dollars to the extent that there is already an indicative cap on the initial cost of the airport. What the President of the EXIM Bank advised was that we look at his concessional preferential window so that we have a blend; that is a mix of both concessional and non concessional and they are ready to stand by us so that we get this financing as quickly as possible to be able to commence the project before the end of the year.

You were also interested in learning from your counterpart ministry here in China, about its general institutional framework. How did that go during your visit?

Presently the Ministry of Foreign Affairs and International Cooperation in Sierra Leone is articulating a five year strategy, geared to repositioning Sierra Leone’s entire Foreign Service to make it more mainstream in national development and to reposition it in the context of the change in political dynamics where today there are more challenges than there were in 1945 when the UN was established. In this programme we want to see how we could build personnel, how we could improve on our competency, our regional representation, appointment and posting of staff .We want to be able to establish a strong diversity  in terms of competencies to move away from the high polarization along humanities in the ministry, to be able to accommodate Economists, Financial Analysts, strong political scientists, people with a strong language background in the big languages involved like Chinese, English, French and Spanish, so that at the end we will be able to have a strong Interpretation Department.  I wanted to examine the method of recruitment, promotion as well as training within the Chinese Foreign Service and I was very impressed by what I was told to the extent that in China, there is even a Law on Diplomacy. We have got a copy of it which we were able to look at.

There is this crucial aspect of staff realignment and a case in point being Press officers in our Missions. You have shown some interest here, too?

There are other major misalignment’s and one of them is the position of the media personnel that are posted to Foreign Missions. I strongly believe they need to be properly mainstreamed first into the Civil service. I don’t think they are properly mainstreamed, they are not Civil servants, I don’t think they have pensions; I don’t think they are governed by the Civil Service rules. Secondly, once they are posted the first line of defense is the Ambassador. Am looking for a situation where these people would be mainstreamed within the Ministry of Foreign Affairs and International cooperation as soon as they are posted to the Foreign Ministry so that they would have a better engagement and connectivity with their colleagues in the ministry. The other misalignment also has to do with salary structure. I find it a little bit out of place for officers who upon being posted overseas with an exponential lift in their salaries and as soon as they go back, they go to their old salaries. That is not a very good economic solution. So we want to see what we can do. At the moment, in the context of our medium term strategy, we are developing a model, which we hope we will sell to the hierarchy of the Civil Service.

During President Koroma’s last visit, there were financial commitments on the part of the Chinese Government towards supporting Government programmes in Sierra Leone. What specifically did you discuss about those commitments?

My position that I tried to explain to the Chinese Foreign Minister and certainly that of President Koroma is that instead of spreading these funds thinly across the country, it is better we use the funds to address critical projects under the budget. In particular, we believe we have infrastructure projects that are posing a huge burden on the budget. If we allow these funds to be applied as indirectly,   budgetary support that will help to ease the budget it will create fiscal space once the funds are utilized to solve the deficit overhang with respect to financing infrastructure in Sierra Leone.

Being Coordinator of C 10, what is Sierra Leone’s strategic position in terms of articulating International Affairs?

And when next is the C10 meeting?

We are hoping to continue to hold high level C 10 meetings outside the fringes of the AU General Assembly meetings. Normally at these meetings the attendance is very poor because Heads of States as well as Foreign Ministers and Permanent Representatives all have other busy schedules. So we started this new idea in March this year where we invited Foreign Ministers, Permanent Representatives in New York as well as at the AU. They were all in Freetown and we had a very successful deliberation on how we think the canvassing should carry the Africa Common Position forward. It was also agreed that before the end of the year we should hold a C 10 Summit where the Heads of States would also   come together, revisit and hangs heads together and see how we could further increase our international outreach. We had scheduled 27th, 28th and 29th of November for this meeting, but it depends on how busy the Heads of States are. We will continue to talk to the Heads of States as I go back to Freetown. President Ernest Koroma has been trying to make telephone calls to convince them so that we could hold this meeting.