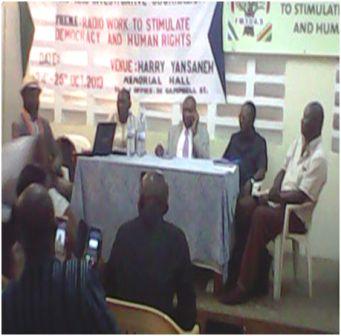 At the Harry Yansanneh memorial hall, on 57 Campbell Street in the central part of the capital of Freetown, about fifty Journalists from across the country have benefitted from two-day quality training on “context analysis and investigative Journalism”.

The educative and interactive investigative training was organized by the management of Culture Radio-104.5 FM, on 24 Fort Street in the central part of Freetown, in a bid to “promote quality and professional Journalism” in the country as part of  “Radio Work To Stimulate Democracy and Human Rights”. The training  could not only be provided for staff of Culture Radio, leaving behind, colleague Journalists in other related mediums, Chief Executive Officer-Elijah Issah Mohamed Gagra has said.

Day-one of the training was facilitated by Mr. Joshua Nicol. It geared towards  democracy/human rights, a truly represented Parliament, an active Opposition, an independent judiciary system, a non-Political/professional Army, a honest and hard working civil/public service system, an independent and responsible media, threats to democracy, above all and lengthily, on topical investigative Journalism issues”.

Throughout day-two, the country’s finest and quality female Journalist-Claudia Anthony, schooled attending Journalists on “skills in radio documentation and presentation”. It was identified that, one of the challenging factors hampering quality and professional investigative Journalism in Sierra Leone is financial inability. Senior Journalist-Claudia delved on some sensitive issues bordering quality documentary production, ranging from “interviews to vox-pop, the natural sound, other sound (relevant), the microphone control, recorder, the pen/note pad, down to “running order” and yet, to a start of a “well researched investigation” for presentation.

Unifying day-two of her training session, Claudia doled out some real and practical investigative assignments to attendants, divided into groups, through the city center of Freetown as part of radio documentary, production and presentation. Widely discussing human rights, strongly came up, the rights of women to own a land.

At the end of the interactive two-day training, certificates were awarded to attending Journalists by President of the Sierra Leone Association of Journalists (SLAJ), Mr. Kelvin Lewis. Before the award of the certificates, Journalist President-Lewis cautioned practicing Journalists to take cognizance of the ongoing conflict between a sect of the media practitioners and the state, having some senior Journalists arraigned in court while others wait in prison.

Journalist President-Lewis appealed to other mediums, including radio stations managements across the country, to emulate from the timely and meaningful training ventures of “Culture Radio-104.5”  to rationalize and  promote quality and professional Journalism in the country, especially the inclusion and molding of new comers into the profession.

Recap of day-one was done by station Manager and coordinator, Theophilus Sahr Gbenda aka “more-fire’, while vote of thanks ushered by smart participant and outspoken female Journalist-Abibatu Kamara of the Awoko newspaper. The training commenced Thursday, October 24th and ended Friday, October 25th. As the project continues, more related trainings are expected to frequently  come up, but often, in the provincial setups for wider inclusion. However, with the perception of listeners, Culture Radio remains focus, neutral, objective and uncompromising. It can boast of airing the “most educative radio-jingles compiled by famous and classic Jamaican artists like Marka B, Lutan Fire, Don Carlos, Admiral etc”.

Sierra Leone implements Right to A...