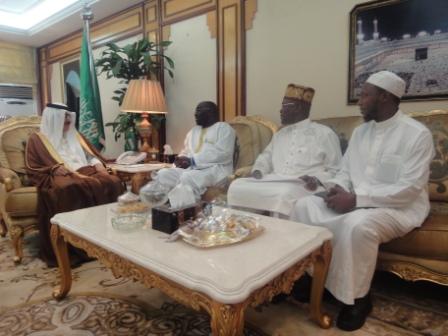 Dr. Bandar ibn Muhammad Hajjar, Saudi Arabia’s Pilgrimage Minister and several other senior officials attended the event. Speakers hailed the services and facilities provided to the pilgrims by the Government of the Custodian of the Two Holy Mosques, Saudi King Abdullah Bin Abdul Aziz Al Saud and his Government during the just concluded Haj.

In his key note address, Dr. Hajjar recounted efforts by the Kingdom from the reign of the late King Abdul Aziz to the era of King Abdullah to receive pilgrims from around the world.  He praised the efforts made by heads and members of the delegation in serving the pilgrims by offering (each one) a complete package and working in dedication, sincerity and cooperation with all stakeholders during the Haj season.

He praised the role of scholars, writers and journalists in strengthening the unity of the Islamic nation, expressing thanks and appreciation to the employees of the various media functionaries for effectively covering this year’s Hajj. The ministry also gave awards for best media coverage of the last Hajj season and the awards were distributed to journalists by Dr. Bandar for their coverage of last year’s Hajj.

Sierra Leone was represented by Hon. Alhaji Moijueh Kaikai, head of this year’s hajj mission to Saudi, his deputy, Alhaji MS Kargbo and other members of the Hajj Mission, Alhaji Sallieu Mansaray, Dr. Ahmed Ramadan Jalloh, among others.

His Royal Highness, Prince Salman Bin Abdulaziz furthered that he views it as an Islamic duty and obligation on the part of the Government of the Custodian of the Holy Mosques, King Abdullah Bin Abdulaziz, to ensure that every mechanism is put in place and every facility is provided for the optimum comfort of the pilgrims.

He intimated that after the completion of the Grand Mosque expansion programme, pilgrims will definitely bask in total comfort while performing the rituals of the fifth pillar of Islam. He stated that, as it is evident, never before has the Grand Mosque gone through such colossal expansion measures, and the main purpose of all this process is to fulfill the tasks imposed on the Kingdom of Saudi Arabia by virtue of its being the cradle of Islam and the Kiblah of all Muslims around the world. H said it is through serving Islam and Muslims that the Kingdom derives its valour and strength. It is an honour for Saudi Arabia to host millions of Muslims on its soil every year for the sole purpose of fulfilling the rituals of Hajj once in a lifetime, he concluded.

Road Safety to be included in Sier...