Hajj is five days but the spirit is forever 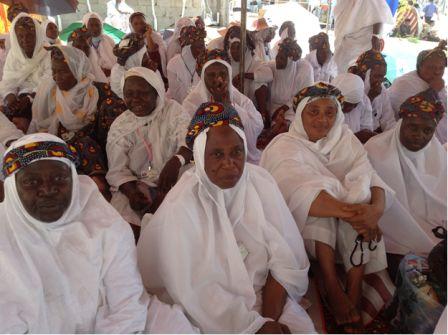 Hajj is five days but the spirit is forever

One of the signs of a successful Hajj is to return (from Hajj) renouncing this world and aspiring to the Hereafter.   Sierra Leonean Female Pilgrims in Arafah last Tuesday

Allah the Almighty legislated the acts of worship and obedience for great wisdom and sublime objectives. No wonder, as they strengthen the faith, purify the soul, correct the attitude and refine the morals. If acts of worship did not achieve these objectives, then the Muslim would not benefit from them properly. In such a case, acts of worship might turn into lifeless rituals that one performs without any actual influence on his reality and attitude.

This rule applies to Haj. When the believer performs Haj properly realizing its objectives and feeling its meanings, it will be of great influence upon him in this life and in the Hereafter.

Thus, dear pilgrim, Allah the Almighty honored you with the blessing of visiting His Holy House and enabled you to perform His obligation. Therefore, you have to stop and contemplate your conditions, review the state of your heart and correct the course of your life.

The most important thing that you should maintain after your Haj is the issue of steadfastness and guarding this great deed (your performance of Haj) against things that could nullify it. You should ask Allah the Almighty ceaselessly to help you adhere firmly to His religion and guide you to obey Him, and make you avoid His disobedience so that you will be “with those to whom Allah has shown favor, of the prophets, and the truthful and the martyrs and the righteous. The best of company are they! Such is the bounty of God, and God suffices as Knower.” (Qur’an, 4:69-70)

Allah the Almighty gave people examples illustrating this issue to warn His slaves of invalidating their deeds and losing them when they need them urgently. Allah the Almighty says: “Would any of you like to have a garden of palm trees and vines, with rivers flowing underneath it, with all kinds of fruit for him therein; and old age has stricken him and he has feeble offspring; and a fiery whirlwind strikes it and it is (all) consumed by fire. Thus Allah makes plain His revelations to you, in order that you may give thought.” (Qur’an, 2:266)

This example speaks about those who did good deeds and then regressed replacing good deeds with evil ones. We seek refuge with Allah the Exalted from this. In his commentary on this verse, Ibn Abbas (may Allah be pleased with him) said: “This is an example of a rich man who does good acts out of obedience of Allah and then Allah sends him the devil whereupon he commits sins till all his good deeds are lost.” (Al-Bukhari)

Dear pilgrim, remember that the accepted Haj has signs. The most prominent of these signs is the continuity of uprightness and obedience to Allah the Exalted. Furthermore, your relationship with Allah the Almighty should be better than before. Al-Hasan Al-Basri (may Allah have mercy upon him) was told that the accepted Haj is rewarded by Paradise. He said, “The sign of this is to return (from Haj) renouncing this world and aspiring to the Hereafter.”
I wish that you, dear pilgrim, while finishing Haj, you realize that its most important objective is to train the Muslim in worshipping Allah the Almighty alone, to comply with His commandments, avoid His prohibitions and follow the Sunnah of His Prophet (pece be upon him). These objectives are not confined to a certain time; rather, the Muslim should adhere to them as long as he is alive. Allah the Almighty says: “And worship your Lord until there comes to you the certainty (death).” (Qur’an, 15:99)
Your condition after doing good deeds should be like those about whom Allah Almighty says: “And they who give what they give while their hearts are fearful because they will be returning to their Lord.” (Qur’an, 23:60)

Although they try to get closer to Allah Almighty through various acts of worship, they fear that their deeds may be rejected. That is why Ali (may Allah be pleased with him) used to say, “Be more concerned about the acceptance of your deeds than about the deeds themselves. Have not you read the Qur’anic verse in which Allah Almighty says: “Indeed, Allah only accepts from the righteous [who fear Him].” (Qur’an, 5:27)
Hence, Allah the Almighty commanded the pilgrims to seek His forgiveness after departing from Arafah and Al-Muzdalifah saying: “Then depart from the place from where [all] the people depart and ask Forgiveness of Allah. Indeed, Allah is Forgiving and Merciful.” (Qur’an, 2:199)

Finally, dear pilgrim, you stood at Arafah, you shed tears and you showed remorse over your previous misdeeds. Allah the Almighty emancipated you from Hell, so beware of regressing to sins after being forgiven by Allah or drawing near Hell after being saved from it.

Be determined to make your Haj a turning point in your life, reckon yourself and determine what influence your Haj had upon your heart, attitude, words and deeds.
Keep doing good deeds even if they are little, because regular small deeds are better than interrupted greater ones. You should know that deeds, which Allah the Almighty loves most, are the most regular and constant ones even though they were little.

We ask Allah the Almighty by His names and most beautiful attributes to accept your Haj, Forgive your sins and reward you for your efforts. We also ask Him to accept our good deeds and provide us with steadfastness and uprightness until death.

By Sheikh Alie Kallay in Makkah